I guess that title needs to come with a spoiler alert. But honestly, it was a great show. First let me thank Cindy (for the photos) and Tanya/ Nicole/ Faye for the various videos. You guys are awesome.

For whatever reason, I didn't have the nervousness or sick feeling before the show this time. I felt really mellow and positive about all of it. The rides leading up to the show were a bit fraught but the one the day before was awesome. I guess this time I decided to let the one good ride set the tone rather than the bad ones.

Like I said, it was stinking hot by the time my rides were up so I opted for a 40 minute warm-up. Carmen was awesome in the warm up and had a ton of energy.

To be honest, I should have given us more time because I wasn't quite ready when it was our turn. I'm still figuring out the best approach for her. But it didn't matter because it was time for us to go. When we walked in and by where the judge and scribe were sitting she gave a massive shy/spin when she saw people were there. I put my leg on and circled her back and by.

We went back and she gave a sigh and relaxed.

Then the bell rang and in we went.


I don't have  video of this test but it felt pretty good. On our first lengthen I asked for a bit too much and she broke to canter. Totally my fault and we just regrouped and carried on. About half-way through I could feel Carmen go 'OH! now I know what we're doing!'  and she settled into the work beautifully. Our scores were a mix of 6, 6.5 and 7's for a final score of 65.429 with a comment of 'lovely horse! Further develop suppleness over topline'.  We placed 4th over all (there were more than  4 in the class I just don't remember how many!).

There was a bit of chaos on Saturday because the judge got so far ahead that the times were all moved up by a 30 minutes (if you wanted).  I asked if I could again in about 10 minutes and the judge agreed. I quickly hosed her legs and hopped back on. A little more warm up and she was ready and in we went.

Other then her deciding that a leg yield from the rail to the centre line was a ridiculous ask and she'd never heard of such a thing, the test felt really really good.

Here's a video of the whole thing:

Well there's a lot to improve in this there is a lot that I love. And honestly, it's the most consistent we've ever been. We actually got 7's on our free walk and lengthen trots!

I rode this test really focussing on keeping her straight and on the aids. 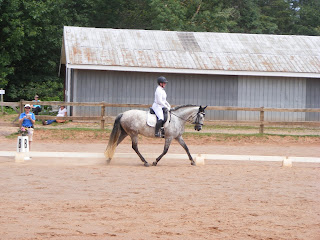 Our scores were mostly 6.5-7 with one 5.5 on our first leg yield.  Our final score was 66.528 and a second place (but in full disclosure there were only two of us in the class) and a comment to work on leg yields. Sigh. We work on them all the time.

On Sunday I spent a lot of time in the morning hand walking her and trying to keep her cool and rested. That turned out to be a mistake because Carmen was a fire breathing dragon in the warm up! She  had decided that certain things were totally frightening and she was going to run away. In the past this would have really intimidated me. Not anymore. I sat up, took a hold and booted her forward. If she had energy to burn then by god, let's go. I found moments of softness and really rewarded those but I was taking no bullshit. Once again the warm up felt far too short.

Then there was the debacle with the number (yesterday's post) but we regrouped. It felt like this test took a lot of active riding. I had a caller which was great because it allowed me to keep all my focus on Carmen where she needed it.

Here is the test in all it's gory details:

A lot to take away from it. One is that Carmen's would really like to negotiate this whole 'acceptance of the bit' thing. But I was not letting her get all inverted and then take off on me. Also it felt a lot more like a wrestling match than it looked, which is good information. We got a 5.5 on our first halt (as soon as I let go of the contact she decided to move around) but otherwise we were a mix of 6.5-7s and few sixes for a final score of 65.714 and comment Very nice horse. Some nice moments. More suppleness over back. Lengthens need improvement.  Which could pretty much describe every ride we have.  We place 6th out of 9 or 10 riders. The spread on this test for the placings (it may have been true of the others too, I didn't really look) was about 3 percentage points. After this test I went back to the warm up ring and we schooled our halts. This is not a new idea, that halts are still and that she waits so I felt that I should let her know that it is also true here.

I put Carmen back in her stall to have a pee and cool off for a short time and then got back on. The warm up was much shorter but I kept her in front of the leg and supple. And this test felt really really good. I was happy with how it all went.

We got far more 7s in this test and a 6 on our stretch trot circle. Our final score was 66.111 with the comment lovely horse- work well together. Continue to develop supplies and bend.  We place second out of two again, but since Shanea was first I'm not gonna lose sleep over that.

At the end of the show I went in to thank the judge for her kindness and comments. She smiled and said 'which horse were you riding?
'the grey andalusian in first level (there was a grey andalusian mare in second level too, she was stunning).
The judge then warmed my heart by saying 'ooh, yeah. She's a lovely horse.
Thank you. I think so too.
No, she's really lovely!

Of course she is but it's nice that others see it too.

Why was this the best show ever? Because we were the most consistent and it felt that we were working together the whole time. And when we weren't I was able to get her back. In the past, after that big spook at the judges booth she would have been fixated on it and it would have been a struggle. This time I was able to show her it was fine and she accepted that.  The scores were better than we've been getting and placings didn't even matter (although I'd be lying if I didn't say that one day I'd love to win one of the awards). It was also a lot of fun with so many supportive people. There may have been drama, but I didn't see it. What I saw was a bunch of people having fun and enjoying their horses. None of us are going to the olympics so if it's not fun, what's the point?