One of the things that Tristan says on his website (paraphrasing here) is that the big things are the exam and the basic training is the preparation. For example, leadings his the preparation, getting on the trailer is the test. I liked that way of thinking about it.

So the show this weekend felt like a big exam to me. I had all the same old feelings I used to have for finals: did I study enough, will I remember my plan, what if I don't know the answer?

And the big one: what if I fail?

What would that mean for the work I've done and the work I want to do.

Because of course a bad show would mean the ruination of everything.

Carmen is not the only one who can be overdramatic. In fairness, my last show there was a bit of a disaster.


But if there's one thing I'm good at, it's making a plan. So I had a very specific one for the show and I was determined to stick to it.

Trailering was not a big deal and I put her in the stall where she settled pretty quickly. We ended up being pretty much by ourselves for the weekend in this section of the barn. I was really worried about it but she was pretty chill about it. I was super impressed with that. 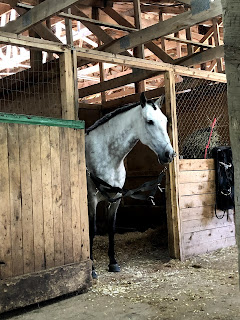 Shanea arrived to help me with the warm up the night before (you can pay a fee and warm up in the dressage ring on friday). I took her over tacked up but with the rope halter on so I could do my groundwork first. The ring steward told me I couldn't lunge when people came and I told her that I wasn't going to - I was just doing 'groundwork.' In the end it didn't matter because the other people who were going to share the ring with me were not there so I had it all to myself. I worked Carmen through our patterns until she was relaxed and chill and then mounted.

In all honesty, it was a good session for us. She started tense and I responded the same way but remembered to let go and from there things got a lot better. She had issues with the flowers at E so we worked on that a bit. About 45 minutes in I got this trot down center line and halt:

You can't see it but as soon as we got that halt I hopped off. Shanea was surprised and asked what I was doing. I said that I wanted to end on that good note so that she learned from the positive. I'm sure that Shanea wanted us to do more but I kept saying that I wasn't worried about the score, just the relaxation.

The next morning I took her early to the warm up ring. Paula brought me my 'toys' since we were all alone and we practiced with them. It was so beneficial to work with the things she was familiar with to settle her in the ring. 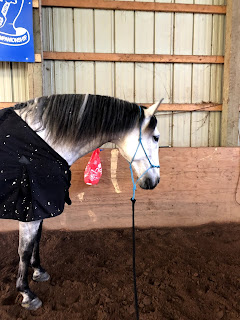 Here's a small clip I took while practicing.

After that we chilled in the barn or on walks grazing (well she grazed, I enjoyed the sun because warm weather finally decided to arrive). My ride times were later in the afternoon and I could feel myself panicking. I tried to talk myself down off the ledge but couldn't so I sent a frantic text to Karen who called me and talked me down. She pointed out the work I had done, asked me about my fears and then reminded me that if it all went to shit I could simply halt, regroup and then carry on. And I realized she was right. I would lose points but that was fine. The key was for me to not engage in fights or get too performance oriented.

My warm ups before the test was amazing. Carmen was soft and listening. There were people standing around, horses popping in and out of the ring, children playing and she trusted me about all of it. There was no 'fuck I'm out'- she just asked me questions and I answered. I got a lot of mileage with using my outide seat bone to bend her through the corners.

We rode First Level Test 2 & 3. For the first one she was tight but did her absolute best to follow my lead. There was one spook at E but we recovered. Our stretchy circle was a bit of disaster but overall I was quite happy with it. A friend took a video and put it on my FB page if you want to see it (I can't figure out how to download it).


For the second test (First Level Test 3) she was much much better.  I spent some time in the warm up before practicing shoulder in and when we went in to the ring to walk around before the bell I asked her to do shoulder fore by the evil flowers. That helped a lot.

I was so excited about how well she did I never even went to check my scores until the end. I had a 60 something on the first test and 61 on the second. This was pretty much in keeping with how the judge was scoring everyone for the show.  We finished 3rd (out of 3) for the first test and first (out of 1 but your placings are based on score when you're the only one).

The next morning Carmen seemed a bit unsettled so I spent a large chunk of the morning just hanging out with her.

It was just what we both needed: I sat on the picnic table and she grazed all around me. She began to relax and let down and we hung out more before I put her back in her stall. We also did some work with a flag outside the warm up ring (there was someone in there bright and early). It was good to do it right there though because of the traffic whizzing by (next to a off-ramp on the highway) and lots of things to look at.

Once again our warm up was really really good. Seriously, I loved how relaxed and forward she was. It felt really good. Our first test (First Level T2) felt better than the day before. I felt like we were more connected. There was a funny moment and I just had to laugh: The movement is Left lead canter across the diagonal, trot at X, pick up right lead canter at F.

Our discussion went like this:
Me: and trot at X
Carmen: right, simple change- I got this! *executes perfect simple change through trot*
Me:no, we trot right now. *bring her back to trot*
Carmen: You are off course! It's CANTER! *picks up canter.
Me: TROT
Carmen: *flings head and is seriously annoyed* Why did we practice all those simple changes then?!
Me: okay, here's F aaaand canter
Carmen: OMG MAKE UP YOUR MIND

I was coming through the corner giggling. It was funny. And I will take a mistake based on anticipation over her taking off any time.

For our last test we were tired. It was hot and we both felt exhausted. I took her back to the stall before hand to have a drink and a pee (me too). The person before me scratched so I could go in early. I decided to see how it felt but after 10 minutes she felt ready to me to in we went.

And it was awesome. Carmen was with me the whole way. She was much more relaxed about it and listening. It was a great way to end.

I got our sheets at the end of the day and we had gone up for both tests (marginally): 61 and 62. My placings were the same as the day before.

So this is the tale of how I placed 3rd out of 3 and still feel like I hung the moon.