Nothing really exciting is going on here.

Which is a good thing. Carmen and I are hitting our groove and it feels good. it also probably looks like watching paint dry.


We seem to be getting into a pattern of riding 3 days and then 1 off. Sometimes it varies a bit depending on my schedule and the weather (which continues to be unsettled).

Some of our rides are just awesome from beginning to end. Others are less so. I try to evaluate her mood in the barn and make some decisions from there.

The other day I was planning to ride but when I came out to the barn both horses were quite unsettled. The steers were in the woods across the road. I don't know what the handlers were doing but there was lots of shouting and some crashing and banging. If I didn't know better I would say that they were using the steer to demolish a shed. But we couldn't see.

I decided to spend our time working on our groundwork patterns rather than riding. I was sure that I could ride her through it but I wasn't sure what would be accomplished. So we practiced the patterns from the TRT method. Carmen was really trying to be good about the whole thing and relax. I could see her working really hard on it. We never got to the point of full zen but that's okay. I don't have that expectation of her. I am working on settling for good enough if the try is there. 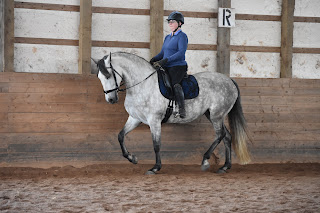 When we do ride I'm working on keeping her coming from behind and lifting up into transitions, not falling on her forehand. It is coming. She even seems to be understanding the idea of lengthening in the trot and not going faster.

I've not been able to have a lesson for a while which is frustrating. I had one booked for friday but there was torrential rain and a thunderstorm in the morning which caused quite a few cancellations and made it not worth it for Shanea. Instead I rode in the afternoon with Julia and it was a fun ride. A few discussions but nothing major.

We had rebooked the lesson to 7:30 this morning (ugh) but that ended up being cancelled too. So, because I was dressed, I rode anyway really early.  Carmen was a little more opinionated about the far side of the ring- but only on the right rein. I asked her to bend and she gave me the middle finger. I wear spurs every ride now so that allowed me to add some 'teeth' to the bending aid. Which she took major exception to. This resulted in a short but intense discussion that when I ask her to bend I expect Princess Pissy Pants to at least try, not throw her shoulder against me.

With that settled we were able to work on leg yields, transitions and lengthens.  We had moments to discussion but for the most part our work was pretty good. While I might not classify this as a 'good' ride, I would have last year. I find that I'm able to shrug those off and not buy into the whole drama llama thing.

After your horse has grazed quietly under a water slide, it's hard to take her fear of song sparrows seriously. Especially when she's only worried on the right rein. 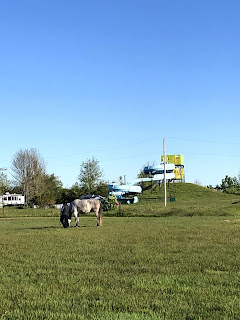 Of course it's not all about Carmen. I need to make sure that I'm sitting up and back and not tensing with her. I am getting better at just shrugging off the occasional spook and carrying on. this whole zen thing might actually be working for me.