The Rhythm is Gonna Get You

It's not news that I really want to get back into the training swing. Last week I sent a text to Shanea and we arranged for a lesson today.

In the morning I did some groundwork and TRT method. I had been doing a lot of thinking about 'troll corner' and how to help Carmen learn to relax. I was watching a video where Tristan was answering questions about horses having a spooky corner. He said that there really is nothing to teach them in terms of not reacting to specific stimulus because there usually isn't one. Instead it becomes a habit in which the horse gets tense in a particular spot. Then the rider builds tension and this results in a reaction to any stimulus (like a bird).

I did some pondering and got an idea. Carmen has learned really well to relax to the various 'toys' I use (flags, clappers, plastic bags etc) so I decided to use that learning to set up a lesson for Troll corner. I started in a comfortable spot - near the gate. And then took her over to troll corner. Interestingly she actually did explode in response to the bag. But quickly fell back into understanding the task. Soon she was relaxed and mellow.

When it was time for the lesson I mounted and we walked off on a long(ish) rein. She looked askance at the far side but didn't get explosive or balky.

Shanea came soon after I mounted and we began to work. The exercises were simple enough. First just walking and reaching forward. Inside leg to outside rein is apparently still in fashion.


We then picked up trot and doing a serpentine exercise: each time we returned to the rail we were to do a 10 metre circle.

Initially Carmen and I were a real mess. Straightness and the correct bend were elusive little buggers. So was rhythm and attention.

Fortunately, Shanea is patient and I am stubborn. Slowly the exercise began to flow and we got into the rhythm of it. 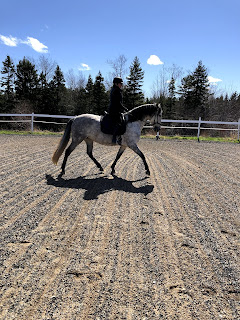 At times things were distracting to Carmen. Did I mention that Ed decided that this was the perfect time to use the tractor to grade the driveway? I could have texted him to stop but it seemed to be a little distraction so I let it go.

Here's a video of the work:

I don't know where we were in the ride that this was taken but I know it got better and better.

It felt lovely to find us working forward and her swinging over the back.  We gave her rests when she was good to help her understand the lesson.

Our left lead was fabulous- forward and effortless. We even did a bending line and she was awesome. To the right was a bigger struggle, but that is no new for us. I have to say that it was far better then when we started last year.

We ended after a few minutes of canter and we walked out on a long rein.

It felt so good to have this second lesson of the year go so well. I have a lot of things for us to work on but it feels good.

Irish and Julia also had a lesson and they looked great.