Sorry for the late recap everyone. I was super busy with Christmas stuff and didn't have time to write it.  I hope that you all had a great holiday doing what you love with the people you love.  Our Christmas was nice and quiet. The 'kids' came, although Amanda was quite ill with what turned out to be a kidney infection.

If you recall, on the day of the lesson there was a bitter north wind blowing so I had taken her up to do some ground work and it went great. When I brought Carmen in again and got her ready she was lovely and relaxed. We did some groundwork again and then I got on. I started off with asking her to bend and soften. I wasn't too worried about where we went as long as it was soft and she was seeking relaxation. It went really well.

Shanea arrived and I put in the ear piece (I love this systems for coaching, I can hear so much better and talk to Shanea about what I'm feeling). Just as we were starting a couple ATVs went down the road (not a big deal) and then into the field next door but now where we could see them (a big big deal).

Carmen immediately went into high alert and the hamster fell off the wheel. Shanea walked beside us and we tried to help her settle. But between the cold wind and the noise of the ATVs it was not working. I realized that I was not helping Carmen at all so I asked Shanea to get on. She hesitated and then went and got her stuff. While she was gone I put the halter and lunge line back on Carmen and did some ground work.

Shanea got on and it's not like Carmen magically transformed into a unicorn. But Shanea has the skill sets to support her through her existential angst. She started by droppign the inside rein and only using inside leg to outside rein. I know that that helps but I hate when Carmen blows through my inside leg and my lizard brain is convinced that it's the only thing standing between me and death.

Apparrently my and Carmen's lizard brains have a lot in common. They only differ on where certain death lies.

Shanea, however, is young, talented and unbreakable. So she shares none of that angst (it will likely come with age).

Here's a video clip of the early part of the ride. You can see she doesn't hold with the inside rein and how she pats Carmen for being so brave (by now the ATVs were gone).

The wonderful thing about the 2-way system is that Shanea could describe to me what she was doing in the moment and I could see how it worked. At some point soon after the above video Carmen just let go of all her tension and got to work. It was beautiful to watch.


You can see Carmen stretching to the bit and Shanea supporting her the whole way. I can see that my fussing is likely contributing to the whole problem and I filed that away to work on. Shanea says I'm getting much better. It's alway hilarious when you end up in an arguement with your coach because you believe you suck and she's telling you that you don't.

Carmen is a stunning horse when she flows. 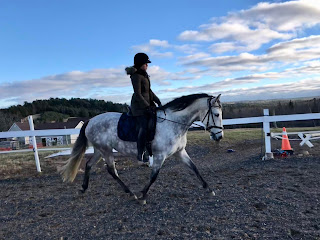 I could see a whole shift in her from defensiveness to being forward and listening. It was lovely to see her gain confidence. I was happy that I had Shanea get on her to help her with that. I believe it was the right call.

Shanea was having fun too. I said ' I bet that feels different then the last time your rode her'.

We both felt really optimistic after that ride. It's helpful for me to see things going smoothly- it convinces me that it is, indeed, possible. 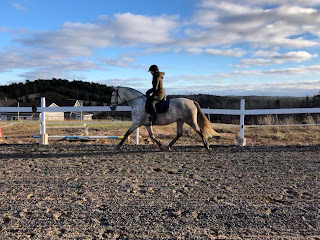 What I was curious about was whether I could get the same result without Shanea. Monday was Christmas eve which was a half-day holiday for me (as is Christmas day and Boxing day. Living in NS has its perks!). I came home and got Carmen ready. She was very relaxed and after confirming everything on the ground I got on. The ground was a bit hard so I didn't plan to do much. She walked off relaxed and forward and we went everywhere with zero issues. Zero.During that time I worked on keeping my hands soft, staying off the inside rein and following with my seat.  After about 10 minutes of walking I hopped off.

I was able to ride again on Boxing day. The day started at -12 but warmed up to -1 by lunch time so I decided to give it a go. The ground was okay and I didn't plan to do much more than walk and trot. I stayed away from one end which was harder. Although she was a little more 'up'. we were able to work through everything without getting in a big fight. Every time she stretched and released tension I rewarded her. When she tightened I stayed on the outside rein and ignored the inside. It was a good session and lasted about an hour.

The nice thing about focussing on relaxation is that I'm no longer worried about the perfect leg yield or whether we're practicing the 'moves'. Instead it's about her body being supple and her brain staying with me (keeping that hamster firmly on the wheel).