Staying Inside the Box

Friday I had a lesson with Shanea. It was the first time riding since I was away. I warmed up before Shanea arrived and Carmen seemed pretty mellow.  However, right after Shanea arrived and we started the lesson the wind picked up and there was a sudden gust that sent a  little dust devil in the arena. Carmen took exception to this sudden mini-tornado in her ring and decided that was the area that we were never ever ever ever going.

At least that gave me a chance to work on the idea that we go places and while I'm willing to support her, I'm not willing to let her make those choices.

When we were walking down towards the area she tried to balk, then to spin. When I kept riding her forward she leaned back on her haunches and spun away. I can quite appreciate the athleticness of the maneuver.  Shanea even commented that she was being a bit 'difficult'.

What Shanea noted was that when Carmen was being resistant she was throwing her shoulder against me and then I over-correct which puts Carmen all out of alignment and both of us are unbalanced.

My Task was to keep us inside the box: essentially her shoulders and haunches aligned and underneath of me. Even when she's flinging herself around. It's not easy - she's getting fitter.

Here we are are heading through the 'nope' corner. See how her neck retracts? This is what makes it hard to not ride with a super short rein.

Shanea was talking me through using shoulder in as an exercise to help with this. It allows her to be 'away' from the scary place but use herself. 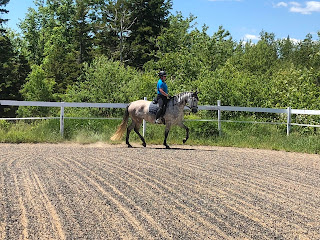 And it does work. This is us a while later riding towards the area where the little dust devil erupted. 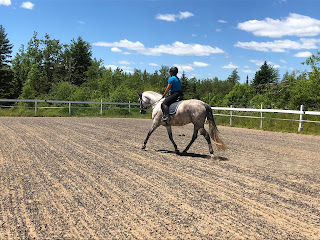 It was a 'hard' lesson both mentally and physically. I had to keep my self aligned with my seat relaxed. Mentally because I had to be aware of Carmen's attention but not buy into it or fall into a self-defensive posture.

But it was so worth it. 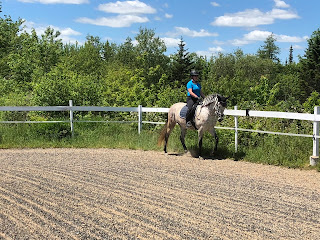 I could feel her relax and come to me each time things went a bit awry. There were definite discussions but each time we came together.

We then went on to some canter work. My task was to keep Carmen straight under me. Which is really really hard, especially going to the right. She tends to throw her haunches in. Shanea had me canter down the quarter line and stay straight. Carmen headed over to the rail and Shanea said 'no, don't leg yield, stay straight!'.

I called out "This is not my idea, Carmen is doing it'. Which is a total cop out but honestly it was impossible to keep her on the line. We worked at it and things started to come together. Not perfect. But definitely better.

Sometimes Carmen would get strong and run through the bridle. When that happened I was do a small circle until I felt her balance back under me and then carry on straight.  It was exhausting but I can feel what Shanea was heading for. And in the end I had a lovely flowing horse.

I rode a twice since that lesson and each time there was a discussion but nothing major. I was able to practice what I needed to.

Today Cynthia came to ride with us. The husbands were working on a shed down by the barn but this was a non-issue. After a good ride we  headed out into the woods for a hack. I've not done a lot yet because I've been riding alone a lot. And by 'alone' I mean that Ed wasn't home on the farm. I didn't want to head out if he wasn't around. Irish was being a bit tight and spooky but Carmen was completely mellow. In fact, she lead for a lot of it. I just made sure we were inside the box even though we were out of the sandbox.