“I have lived my life according to this principle: If I'm afraid of it, then I must do it.” ― Erica Jong

Thanks everyone for all the love and support from my previous posts. I know that I didn't respond but I read and loved every comment.

I suspect that my show recap will be at least two posts . This should allow me to not be ridiculously  too long (at least that's the plan). This will likely result in me skimming over some details that might find their way back into the blog another time.

Before I was getting ready to leave I was really second guessing going to the show. By friday morning I was flooded with dread. Carmen was clearly picking up on my vibe and was doing everything in her power to tell me that my negativity was making her upset. I realized it and knew I had to get myself under control.

Despite all this she loaded well. I used the time I was driving to reflect on my emotions. I used some strategies I learned from 'Brain Training for Riders'. Essentially I kept asking myself what I was afraid of until I got to the truth.  As I worked through the scenarios in my head: It started with Carmen spooking and getting rung out or falling off. But that wasn't what I was really afraid of. As I worked through the asking myself 'so?' I got to the bones of the matter:
what if all the changes I have seen in Carmen are just superficial? What if, when the rubber hits the road, it all unravels and I haven't really made any difference at all?

Of course if someone said that to me I would see it as foolish. But we are all so good at believing that we're total fakes. Once I faced that it was easier to deal with. By the time I unloaded I was feeling much more positive and I had a clearer idea of my goals:
1. to have a spook free ride
2. to ride Carmen in a supportive and clear way
3. to figure out our show routine

I could immediately see the results of my mood change in Carmen. I set up her stall and we hung out for a bit until it was our turn to ride in the ring. (The show allows competitors to book time in the ring on Friday at 5$ per 30 minutes. I booked 2 slots and it was from 4:30 to 5:30.) I was stabled in the area of Shanea (she hadn't arrived yet) and with the gang at Fraser Equestrian Centre (the ones who hosted the Cindy Ishoy clinic I did). It was a great group to be with- so relaxed and helpful. I watched them set up chairs, shelves and even a carpet and again felt like a red-neck dressage person (note- that was me, they never gave me that impression).

I walked Carmen around the venue and was even able to walk her in the ring. When it was time to ride I tacked up Carmen and we headed to the ring.

And she never put a foot wrong. Everything I asked her to do she gave 100%. She looked around but was not spooky at all. I rode through one of the tests and she was perfect. So I hopped off. The ring person told me that I had another 30 minutes but I said that I was good. Another rider was done and wanted more time so I gave mine to her (she paid me later although she did not need to).  I was so happy with her that I realized my goals had been realized before I even actually showed.

My first ride wasn't until 2 on Saturday so that morning I tacked her up and just walked her in the warm up ring. My goal was to walk her until she relaxed and then stop. It didn't take long for her to chill out and when I dismounted I'm pretty sure I heard her say 'that's it?'


Soon enough it was time to get ready to warm up for real. I was surprised at how busy it was- there were horses and riders everywhere. I tried to stay out of the way while we walked our warm up and I kept having to stop or change direction suddenly. I found myself apologizing to everyone and said 'I am trying to stay out the way'. Jane, who was riding (I've taken lessons from her and she's an awesome rider) rode by me and said 'Don't apologize. You have as much right to be here as everyone else. Hold your line or you'll never get warmed up'.  I realized she was right and started to ride more pro-actively. It wasn't easy and Carmen and I had a small collision in the ring- just one of those 'oh crap' moments where our legs banged but no one was hurt and Carmen just had a little spook from it. After that she decided that I was clearly not being careful of us and took it on herself to look after the both of us. She paid careful attention to where everyone was and pinned her ears if a horse came too close. It was kind of adorable how she decided to step up and take care of things rather than freak out.

The show was a bit behind so we ended up riding about 20 minutes later than the time. which was too bad because we were ready on time. However, that's showing for you and we need to figure out how to keep ourselves warmed up but not exhausted. When I realized we were so late I did a lot of work at the walk to keep her supple but not tired.

And then it was our turn. I stood outside the ring trying to breathe and keep centred. I had arranged for a friend to read for me (thank you Tanya). I had the test memorized but wanted to be able to focus on Carmen and not trying to remember the next movement. It was a great idea.

Here's the video of the test if you want to see it. From a dressage perspective it was fine. From my goals perspective it was incredible. You can see Carmen and I truly working together to lay down this test. She didn't even think of spooking but you can see her ear asking me a question every now and then. A friend posted on my FB post: "Everytime her ear flicked back to you I think my heart melted

💕, you guys were so in tune with each other it was a pleasure to watch. She handled the arena like a pro."


There were some bobbles but nothing earth shattering. When I turned down centre line and sat up, squared my shoulders and rode at the judge like we were Amazons. When I halted I was so happy with her that I actually patted Carmen before saluting the judge (oops, but he just smiled).  I was thrilled with how we did.

My ride times were scheduled close enough that we would only have time to quickly untack and have time for a drink and bathroom break (both of us). I figured that my second time would also be 30 minutes late but it turned out that the judge caught up so it was just 15 minutes late. That didn't give me much time to warm up for the second test but that was fine because she was tired and I didn't want to over do it. I didn't think we did as well but my test scores belied that.


I didn't have time between rides to get my sheets or see my scores. I was okay with that because it wasn't about the score. So you can imagine how thrilled I was when I saw our scores:

All of these comments were totally fair and tell me where to go. They were enough to qualify me for two firsts. It turned out that I was the only AA showing First Level 1 & 2 at Bronze so the placings are based on scores rather than competitors. Which is perfect because I was really only challenging myself.

I was so proud of both of us- it really felt like a true partnership. This photo sums up how I felt. 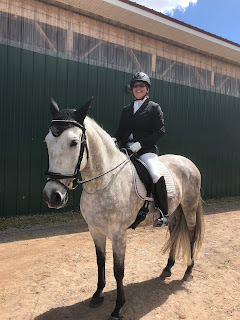 SaveSave
Posted by TeresaA at 8:59 PM