Flowin' in the Wind

Last weekend my lesson was cancelled because of others. We had rebooked for Saturday but that ended up rebooked because of rain. However, the temperatures plummeted overnight and when I got up the next day not only was it frigid but it was blowing  a gale. I texted Shanea and said that there was no point in having a lesson in these conditions. The weather was forecast to improve and Shanea was flexible enough to come for a 5:30 lesson (as opposed to noon). The temperatures were still cool but the wind was more calm (as an aside, WTF Mother Nature? Are you drunk?).

I started Carmen on the lunge and then mounted. Carmen gave one rather large spin/spook just before Shanea arrived. I gave her the update on how things were going. Shanea asked what I wanted to work on and I said 'since she's quite tight and tense, can we work on how to warm up through that? I might be dealing with that at the show and I'd like a plan'.

Not that I don't have a plan but I wanted to see how Shanea would tackle it.


Shanea likes to have the horse relaxed and soft at the walk before moving on and she doesn't really care how long that takes. The goal was to walk around the whole ring and change directions. Carmen was allowed to notice things but needed to understand that she was expected to stay on task. When she came off the aids I was to correct it (well ideally I was to prevent that from happening but then there's reality). It was interesting to feel how my correcting now gives Carmen confidence rather than a reason to argue. It probably helps that I am much less reactive.

We then picked up the trot and it was pretty good from the beginning. Once Carmen was really relaxed and stretched over the back and then was startled by a bird and gave a huge spook. Shanea explained that that is always a risk when the horse starts to relax. She talked about making sure that my legs are on so that she knows what is expected. I went back and tried keeping my leg on and she did really feel more with me.


As Carmen started to trot she began to sneeze and it kept going. I think with the wind and the pollen it had gone up into her nasal passages. She has no discharge or any other signs. We gave her lots of walk breaks and she didn't seemed winded in anyway. After a few sneezes she settled down.  She really getting lots of reach in her trot and it's getting so much steadier. Not that we don't have bobbles- we do. But before it was mostly bobbles.

One thing we struggled with was our upward transitions- they were a bit delayed and not smooth. I'm sure that I was just trying to hard. Our downward ones were great. As we carried on they really improved.


We then picked up a canter. The biggest improvement this year is in her canter- it's much straighter and balanced. Well mostly- once we were cantering down through the corner she sneezed and the wind blew and it startled her and she bolted.  I got her back though in about 20 feet and we went back to work. Shanea said that she's learning that bolting is not the right reaction. She really had been startled but I was happy that she hadn't porpoised or gone sideways.

Other than that one issue our canter work was pretty good. We practiced going across the diagonal and transitions to trot at X and it was some of our best canter-trot transitions. 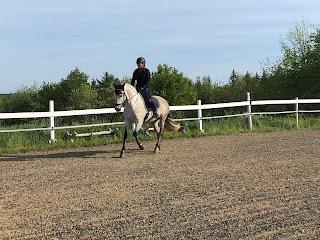 While we aren't showing Test 3 of Level 1 Shanea asked me to do a counter canter loop. It was awesome. And I know that because a) I felt it and b) Shanea said 'wow that was terrific'.

We did a run through Test 1 and Shanea coached me through some of the issues: anticipating a canter transition (post so she doesn't get concerned), the half- circles (don't forget about her hind end on the turn so she doesn't fall in).

Next week is our show and I'm getting quite excited. Not that I'm thinking we'll get any great scores- I know that we can do it but it's still just about miles. But I am excited for us to go and have fun.