Yo Yo Weather and Irish Tries to Kill Me

Just when I think that winter has settled into stay it warms up again. The down side is that the freeze/thaw is turning my winter paddock into a churned mass of mud. The upside is that my ring is doing well and I can continue to ride- albeit sporadically.

Today was mild enough that I had no excuse to NOT ride. As I was doing chores outside I could see that Irish had a glint in his eye. I decided that I would ride him first so he wouldn't run around like a fool and either tear off a shoe or get a sole bruise (or both).

When I went to get him both horses were in the small paddock by the barn eating from the hay net. As I went around Carmen Irish starts to head for the larger paddock. I tried to cut him off but he bolted like a racehorse and took off, Carmen going with him.

At the far end of the field they stopped to wait for me to trudge up through the mud. I gave Carmen a piece of carrot but not Irish- You instigated all this I muttered as we made our way back to the barn.

After grooming and tacking him up I led him up to the ring and over to the mounting block. He starts to spin like a fool so I spend a bit of time on the ground getting him to tune in.

In his younger days Irish was a real handful. He's going to be 17 this year and he has arthritis but he every now and then his brain decides that he's 3 again.

Today was one of those days. 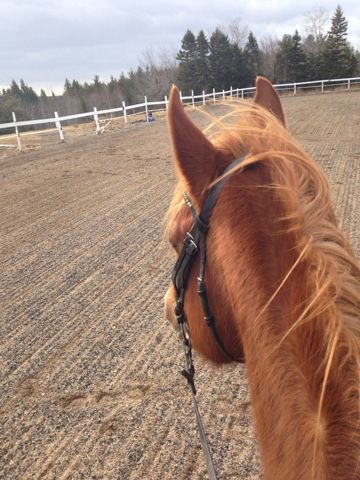 He spooked numerous times and almost got me off twice. He decided that the far end of the ring is the scariest location in the universe.

Me: What the hell, Irish? You've been ridden up her for the last FIVE YEARS. Knock it off.
Irish: There's trolls! Carmen told me. How come you never told me?
Me: There are no trolls. And, for the recored, you are supposed to teach Carmen that there are no trolls not buy into the whole TROLL CONSPIRACY thing.
Irish: I'm sure that trolls are an 'alternate fact'
Me: No. There are facts. There are no alternates unless you are living in an alternate universe.
Irish: hmmm
Me: Never mind. Forget I said that!

Irish actually considered rearing- but he can't do that with his hind end. Thank god. Once I got him moving forward and got his mind in gear we had a pretty good ride. The nice thing about him being 17 is that he really can't sustain shenanigans.

I should mention that during all this Carmen started by galloping around (which didn't help Irish) and then finally settled back to the haynet to eat.

Then it was Carmen's turn. The wind had picked up and I decided that I would do ground work with her instead of riding. It has been a while since I had done this so it seemed like a good day.

Before I tell you about the session let me show you what Ed made for me:

I want to introduce Carmen (and Irish) so some trail obstacles. My plan is to set up a little course outside the ring and incorporate it into the training. The bridge is not ready yet to be stepped on- it needs some more screws and needs to be levelled so it doesn't rock on the ground. However, I think it's good for Carmen to get used to seeing it. She walked right up to it and gave it a sniff and then didn't care.

She started off quite tight and worried about things- looking for danger. So my focus was on being calm and helping her find the calm as well. And it took less then 5 minutes. She's learned to look for the relaxation rather than the escape hatch. It's hard to lunge and take photos but I got one:


I practiced the falling and having her stop. She had not forgotten that lesson at all.


I finished with taking her off the lunge and working with her with no 'string'. she walked beside me and stopped when I did and even backed up.

So, to sum up: Irish was a wild ditzy redheaded tornado and Carmen was the quiet and gentle horse.