Before I had the saddle fitting I had ridden Carmen (in Irish's saddle) and things were definitely on the right trajectory. What was most telling in that ride was that she started being very tight and spooky and I just kept working on the plan. At one point she bolted and I was unable to stop her right away. However I was completely unfazed. I yelled to Cynthia- sorry no steering (we were heading right for them) and turned her in a circle. Once she calmed a bit I kept the canter going up and down the ring until she was ready to slow down and then I kept it going a bit more and then we went to trot and walk. She snorted and blew out and that was the end of her reactions. Somewhere along the line I have become used to her reactions and have learned to ride them. Phew. We had a good schooling session and finished with a hack around the fields.

Friday we had a bit of snow (about 6 cms) but it was light and fluffy snow so was a bit higher. It was the kind of snow that you can sweep instead of shovel. Cynthia and Andrew were coming that night our curling game (we're in a friday night league) and I sent her a text: "if you stay over we can ride in the morning in fluffy snow".  And that's just what they did. Ed asked me how I could ride if the ring was frozen. I told him that in this kind of snow the ring is the base and the snow is the footing.

The morning was beautiful- the air was cold but still and the sky was stunning (promising the winter storm that was coming Saturday night). After a couple cups of coffee we got dressed and headed out to the barn. I was looking forward to riding in my saddle now that it fits.

I lunged Carmen first and she was a bit silly. However, it was not too serious and I only lunged her for a few minutes. At first she was a bit a 'up' but calmed down after a bit. Irish was feeling quite perky and his whole face was proclaiming 'yay, let's have some FUN'.  The first time Cynthia asked for a trot transition he hopped straight up in the air and launched into his trot. It was adorable. I told Cynthia that when he was younger and did that it was accompanied by a squeal.

I don't know why I get so excited about riding in the snow but I do. It's like I'm a kid again and I'm all "look at me, I'm riding a horse in the snow and it's AWESOME'.  The footing was perfect. I simply went for a ride and wasn't worried about schooling or training- it was all about the fun (I did continue to reinforce being straight though). After a bit Carmen began to blow and relax and then, oh my god, actually began to enjoy herself. I grabbed my phone and took some photos of Cynthia and then hander it to her to get some photos of us. 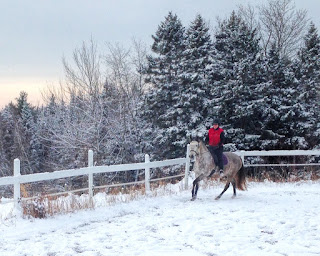 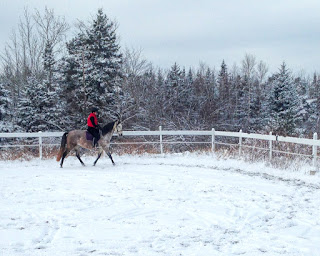 I lost all track of time but we finally called it a session and dismounted. Both horses were looking pretty cheery. I took Carmen to a spot where we normally have a graze after a ride and she immediately dove into the snow to grab some of the grass.

We turned them out and went into the house. Ed was making brunch (bacon and eggs and toast) and I realized I was starving.

Later Ed and I headed into Halifax to meet up with our kids and go to a Mooseheads Hockey game. We went to the nearby pub for lunch and then the game. Amanda and I bought matching Mooseheads hoodies. It was a good game but unfortunately, Ed and I had to leave the game early because the winter storm started a bit earlier then expected. It took longer to drive home but as long as you went slow it was okay until just about the end. I was happy to get home. (and to the driver of the pickup that drove on the wrong side of the road to pass the line of cars following the snow plow - you are an asshole).

After I gave the horses their evening care I came back and made myself a hot chocolate and baileys and reflected on my day:
Does it get more Canadian than this????