[T]hat old September feeling, left over from school days, of summer passing, vacation nearly done, obligations gathering, books and football in the air ... Another fall, another turned page: there was something of jubilee in that annual autumnal beginning, as if last year's mistakes had been wiped clean by summer.”
― Wallace Stegner, Angle of Repose 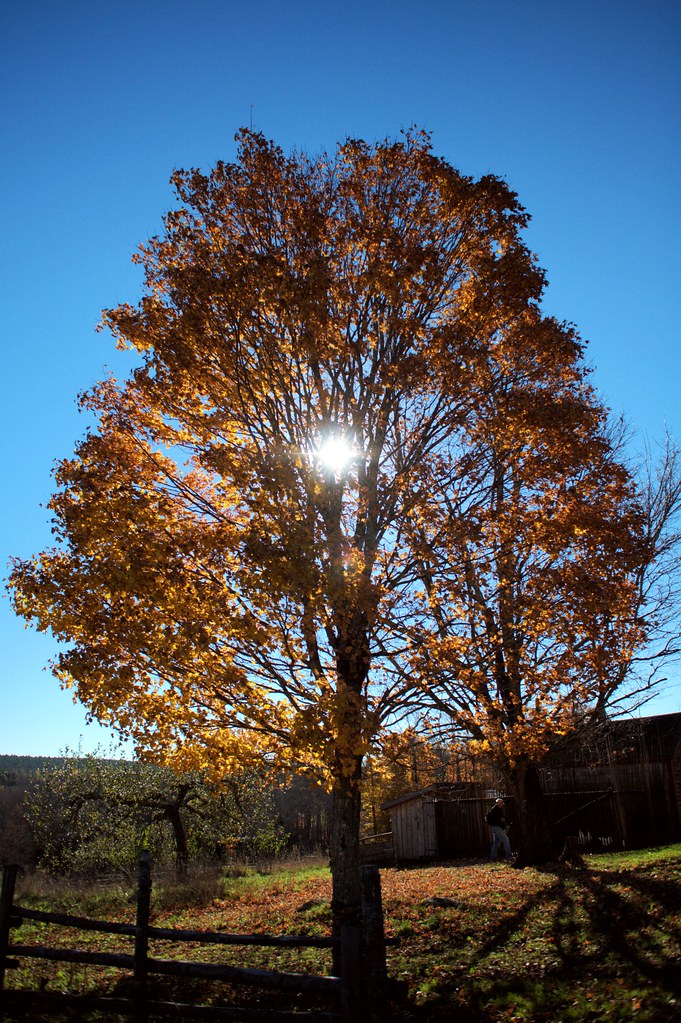 I love Autumn- the light, colour and smells are heavenly. If you have never been to eastern Canada I always recommend September-October. It's our most beautiful time.  It's also a great time for riding- the weather is cooler and the bugs are gone. We've had another gift lately as well- the wind that was pretty relentless all summer has quieted down. This week we've had a return to warm days but the nights are still cool.

I have been having some pretty great rides on Carmen these days. Now that I'm not contending with constant tension and spooking we're able to focus on building our understanding. I'm becoming far more aware of my own body and how it's contributing to our melt-downs. Now, as soon as she tenses instead of thinking 'oh oh I better be ready' I think 'oh I better let go' and I breathe deep and relax my legs and seat to be with her.

It really does work like magic. As soon as I do that I get an ear back, listening. 'do  you see that? what should we do?'  she seems to be asking. And it's not like she doesn't still spook. Yesterday she gave a big one and leapt sideways (most likely culprit is a butterfly) but she stopped as soon as I said 'whoa' . I took a deep breath and then went back to what we were working on. I let it go so she let it go.  She will sometimes keep the tension while we walk by stuff but I don't grab on the rein and  she doesn't run away. I will reach down though and grab a handful of mane or the strap I have across my saddle.

Royce had told me that I was contributing to it and I felt frustrated because I didn't really understand how or what I was doing. Now I do and it's opened up a whole new way to ride. I am finding tension in my body I never knew I had and I'm working on letting it go. Carmen is pretty good at letting me know when I'm tensing too.

The 'scary' side of the ring is flipping around- one day it's at C, then V then A.  That's okay. While I don't ignore it I don't try to confront it either (most o the time). I try to slowly work our way to spots that are scary and she relaxes. If I can't get her mind off a spot and she's so fixated that we can't work on anything I will get her to confront it (usually by backing her into it). Essentially I try to listen to her and figure out what she needs.

She's so much better with Irish in the ring. That used to irk me (why can't she just do the dressage thing?) but now I use it to my advantage. I know that I get to more places quickly and so can work on all sorts of dressage type stuff.

Cynthia came out today and Carmen was so mellow. We spent time at the walk bending, turning, leg yielding. I love that I can work her at a walk without her freaking out now (even if Irish isn't there). When I first asked her to trot she was a bit slow but I didn't get after her strongly, instead I kept asking her to move forward and soon she was trotting like a real horse. Not that I won't tap her with the crop, I will but I have to be sure that I'm not causing it by holding the rein or squeezing.

Bending to the left is easy for her- bending to the right not so much. I need to figure out how to help her with this without pulling on the rein. Some of this I caused because of my tight left hip and stronger left leg but I'm working through it. I got some of the best forward canter from her today. Cynthia even called out 'oooh nice!'  She cantered forward to the 'scary corner' and around. That was our left lead. To the right we struggled a bit more but finally hit our stride.  Once I had a nice right lead canter going I brought her back to trot, then turned up the centre line to halt at X. It was not a square halt but I was okay with it- it was prompt and soft. She just moved after. That's okay- we don't halt at X a lot.

After I dropped the gate and we went out to hack around the field and in front of the house. That was the first time we went that way and she wasn't so sure. I kept myself soft and just held a bit of rein and, you know what happened? Nothing. Just a wee scoot and we were back together. We went back around the other way around the field. Irish wanted to go into the woods so we followed along and meandered amongst the trees. She was not so sure but she was listening and it was all okay.
I really want to take Carmen out on the trail with some calm and seasoned companions. It will do us a world of good. I put a call out on FB to see if anyone wanted to babysit us.  I also need to make some trails and clean up my woods. Now that the bugs are gone working in the woods will be much easier.

It's funny- I am not working as hard as I was when riding but when I dismount my muscles feel tired and stretched. It's much harder to ride without tension I find.
Posted by TeresaA at 3:46 PM