As you know I've been having some very positive rides on Carmen. It's not that she doesn't spook any more but her heart isn't in them like it used to be. She's very easy to convince now that it's all okay. Yesterday I had a great schooling session on her. Today I was working later so decided that I would ride in the morning. I did my normal routine and around 8:30 went out to get Carmen from the field. Irish was closer so I brought him into the barn. Carmen stayed back in the field, watching, but when I went out to get her she came trotting up and put her head in the halter. As I groomed her and brought her to the ring she was very mellow. And she stayed that way through our walk warm up.

In fact she was so good that after about 15 minutes I went over and dropped the gate. We walked our and turned to the right. I decided that it was time for us to try our first solo ride around the field. She was a bit tense as we headed out. I breathed deep and kept stopping myself from tightening my thighs and pitching forward. We rounded the turn to the spot that is the most spooky- fields to the right and brush straight ahead. She did a stutter spook and I breathed in and gently tapped for her to go forward. She marched ahead.

As we went along the far side with the fence on the left,  the woods on the right and the track straight ahead it was very tempting to clutch the reins to keep her from taking off. Instead I aknowledged my (and her's too) nervousness and focussed on following with my seat. My reins were not long but they were not tight and jarring. The whole way down the path she kept her ears on a swivel, continually coming back to me. She would tighten, we would breathe and then relax.

We neared the bottom of the field and she went into high alert- there were three crows in the grass. Carmen hates crows. I thought about dismounting but instead took a breath and said
That's okay. We're going to march down there and chase those crows off.
Are you sure that's a good idea?
Yes. We can do it.

And that's what we did. We walked down there and the crows took off. I could feel her confidence build as we 'chased' them. A couple landed in the big maple that we had to ride under. This she was less sure of. I let her stop and think for a second. Then I gently asked her to walk ahead. And she did. We rounded the corner for home and we both let out a sigh of relief.

We marched up to the barn and I hopped off. I was thrilled. In terms of distance it was short and took, what? Five minutes maximum. But from a training perspective it was huge. Back in May this horse wasn't trusting I could keep her safe in the ring! And now we're hacking. (well sort of). 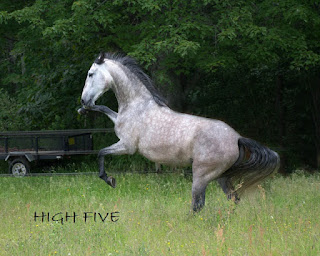 In the barn I untacked her and gave her a rub that she thoroughly enjoyed.
Me: I'm so happy that I just want to stuff you full of carrots! 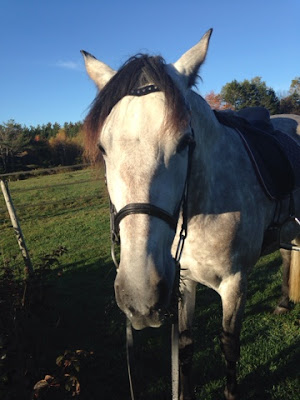 Carmen: That sounds like a good idea to me!
Posted by TeresaA at 4:44 PM