The last post ended on a dramatic cliff hanger- our heroine was in serious danger.

But if you recall Carmen had become a spooky, reactive mess and I was less than impressed.

I had added alfalfa to the night feed and wondered if that was part of the problem. That night I stopped feeding it to her. I didn't ride Tuesday- the weather was awful and I was tired from work.

Today (Weds) was sunny and warm. I love daylight savings time- I much prefer it to be light later than earlier (if I was supreme ruler we would leave it at DST) because it allows me to ride in the evening without rushing after work.

There was no one home when I got her ready and, to be honest, I was a little concerned. I figured I would take it one step at a time. However, I could tell as soon as we got in the ring that she was a different horse. She was a bit 'looky' in the spots that were terrifying on Monday but not the mess she was.  I was careful in my ground work to make sure that I had her attention and that she was listening. In fact she was a bit sluggish.
Me: You know Carmen there is a happy medium between bolting and moseying.
Carmen: You are far too fussy.

I mounted and I made sure that from the beginning I had her attention. I didn't take the approach of 'force' to get her into spots but rather let the work carry us there. When she hesitated to look I brought her back to work. I didn't get harsh but I didn't accept that any wandering of attention. Irish dozed in the sun while we worked. When I asked her to trot she was a bit sluggish so I gave her a light tap with the crop. She kicked out but I kept asking until she moved out.

She was a bit fussy in the contact but that was my fault- I was being cautious and ready for her to spin and bolt. If I was a professional who rode tons of horses I could probably relax right away. But I'm an AA and depend on my job to pay the bills. So I was being defensive. I was able to finally relax my elbows and her acceptance of contact improved.

We were able to walk, trot and canter in all areas of the ring. When I dismounted she stood quietly, totally relaxed. I allowed us to mosey down to the barn and she hung out with me while I did my chores. The hard look was gone from her eye.

I know that it wasn't a clean experiment- but I've decided that Carmen does not respond well to Alfalfa and doesn't need it in her diet. 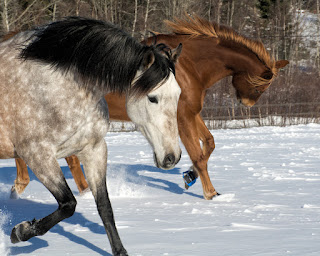