Today marks the one year anniversary that Carmen came home. Last year I was bundle of nerves- excitement, worry, sadness and pure raw emotion made me a bit of wreck. Fortunately I had Cynthia, Ashley and Ed to keep me calm. The day Carmen came home.

The weather was horrible and we were, literally, buried in snow: 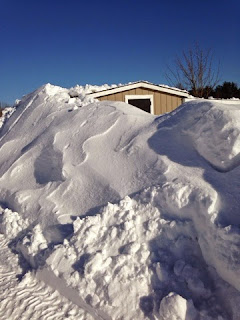 It has been quite the year for the two of us. Full of ups and downs as we got to know one another. Having a mare was a whole new kettle of fish. There were so many people who reached out to help Carmen and I as we stumbled on the first steps of our journey: Karen, Johanna, Roz, to name a few.

It's interesting to contrast to where we are now. I can honestly say that Carmen is coming into her own- she's calmer, more relaxed and more self-confident. In the morning after she's finished her grain she wants to greet me (first things first after all). Where last year she was watchful and wary, she's now quiet and curious. Not that she can't run around or spook or be silly. She can but it's different then before. She greets me when I get home. As my car comes up the driveway she comes down by the fence. I get out of the car and say hello to her and she nods her head and watches me as I go into the house to change.

The other evening I brought her out of her stall to give her a groom. She's shedding and was really enjoying the brushing. When I finished one side she gave a shake like after a roll. It was adorable. I then brushed out her mane and practiced braiding it. She has the idea with the ground tie to not move her feet but she figures that she can move her head around to check stuff out. But when I brought her back to centre so I could carry on with my braiding she just gave a sigh and humoured me.

If I had to sum it up I would say that she's content. 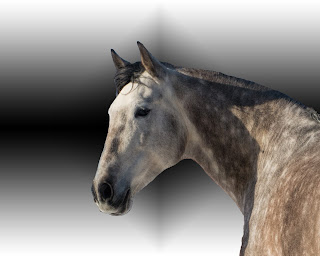