Winter is No Longer Coming

Wednesday was the first winter storm of 2016. It was a lot of ice and snow so we woke with no power. I decided to go to work because there wasn't a lot of snow down. Plus I could have coffee. So I gave Ed a kiss and wished him luck waved goodbye.  Our road hadn't been plowed yet but there were tracks that I could follow in.

Saturday was initially forecast to be a bit of snow and mostly rain. However, things shifted and we spent most of the day in blizzard conditions. I stayed mostly inside cooking and watching Netflix. I felt no desire to exercise because I figured I would get plenty of that Sunday morning. Fortunately we didn't lose power.

I was really happy to see that the snow fence experiment was a success- there was a good 10 feet of clearance before the drifts started. That made is so much easier in the morning.

I opened the doors and Irish came prancing out. He was excited over the snow and seemed to want to frolic.

Carmen was having none of it.

She stayed in her stall looking out suspiciously.

Irish: Hey it SNOWED! *snort*
Carmen: I see that. I don't like snow.
Irish: No it's fun. See! You can prance around and make it fly. (prances around like a 3 year old)
Carmen: Last year it tried to kill me. I don't trust it.
Irish: Aw, c'mon. It's not too deep. I promise!

With that Irish trotted off to have a roll. Carmen looked at me.
Carmen: I'm not sure it's safe.
Me: You will be fine.
She came out to the spot where it was clear and looked ready to stay put. 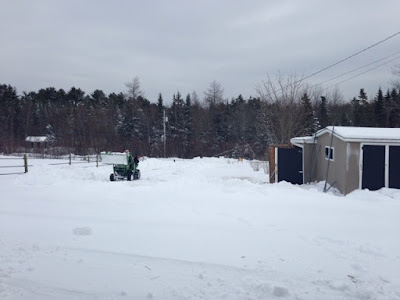 I left her to figure it out. I had to get my coffee before we got to work. While Ed plowed I shovelled all the snow away from the doors. I was not going to have a repeat of last year where we had rain back up to the barn and have no escape. I made sure that there was as little chance as possible for ice to build up or a flood to happen. While I did that Carmen slowly made her way out to the field. While she didn't look impressed she seemed to realize that she was not going to die.

After my work was done I put on the snowshoes and went for a hike. I love the quiet of the woods after a snowfall.

When I came out later Carmen was back in the small paddock. She kept nickering when she saw me.

Don't worry girl. We'll make a Canadian of you yet.