Second Ride in the Snow

Saturday night the blizzard, after attacking the east coast of the U.S. took a swipe at Nova Scotia as it headed out to sea. We had about 10 cm of snow dumped on us and it filled in my path.

I took the snowblower out and re-did it. It didn't take as long as in the day before so that was good. I talked Cynthia into coming out again on monday to ride. The weather was beautiful- sunny, clear and no wind. It was about 0 C and a perfect day to play in the snow.

Both horses were far more mellow than Saturday. I lunged Carmen but it was pretty clear that she was calm and settled. I asked her to whoa and she stopped and looked at me
Carmen: I don't think this is necessary.
After a few minutes we walked up to the mounting block and I got on.

The snow was really too deep to do too much so we walked. It was great to be able work on the walk. Normally she's too busy mentally until she's trotted a bit. So having her totally tuned in was fun. Also, she had to really lift herself so I could really feel the back move. That helped me to work on just following the motion.

After we had some paths created in the snow I asked her to trot.
Whee.
There was so much movement it was hard to stay in balance. Which pissed her off a bit. Rightly so. So I went into a half seat to not interfere with her movement. I can feel the power she has and once we get that harnessed it will be fabulous. I

don't know why but riding her makes me laugh. Not in a mean way, but in a 'I'm having a ball' way. Even when she's being a brat.

We hardly trotted at all- I didn't want to strain anything. Instead we focussed on bend, flexion and stopping from my seat. We finished with a long walk on free rein all around the ring. She was happy and blowing gently.

I love this mare more all the time. 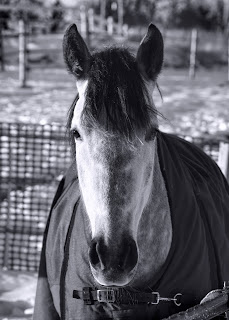