Six months ago two females of different species started a journey together (http://journeywithadancinghorse.blogspot.ca/2015/03/a-new-journey-begins_24.html). Both of us had baggage from our lives before. If you followed my blog since then you will read the ups and downs of us building a relationship. It's not perfect by any stretch of the imagination but I've thrown myself into this heart and soul.

What I've been learning is that I need to find a way to take my heartbreak and worry and desire and intensity and find a way for it to work with Carmen. She's making me take a step back and think about what I want to accomplish and then how to explain it to her. It's not easy. Much of the time she's so busy worrying about everything else that she sometimes can't hear me. Hell, sometimes I can't hear myself over my own thoughts. I had so many hopes and dreams with Steele that I would be lying if I said that it's never intruded.

But I'm nothing if not goal oriented. So I keep working away at it. Which brings me to today.

Just then the neighbours children started squealing and screaming in their yard. Carmen was definitely not sure about it. I got on anyway and we started off. I have been working on ignoring any potential spooky spots so I don't set up the expectation that she will spook. I've reached the conclusion that much of it is learned behaviour and not so much reaction. (I could go through a long explanation of why I think that but let's save that for another post.) My focus was on getting her to bend and soften and use her hind end.

As always we had good and bad moments. The squealing increased in intensity after a bit and she was getting quite upset.
"look" I said "I don't like it either but that's what human foals do. I did it when I was a kid. We just have to not worry about it".
After that she seemed to settle. I asked her to transition from walk-trot-walk while maintaining the bend. The first time she was quite annoyed at this 'ask'. After that she seemed to get it. Her trot to the right got better and better. I let her walk and stretch and then switched direction. After a few sticky transitions all of a sudden she began to float. She stretched over her back and became very soft in the bridle. It was fabulous. And tricky. All of a sudden she reacted to the least little movement of my seat. This meant that I had to be very very careful in what I asked. But she walked and trotted on just a breath. I was no longer thinking of anything but the ride. Everything else disappeared. It was the same for her. She no longer was thinking of outside of the ring. She was right there with me.

It was amazing. I asked for a canter and we were as light as air. I was grinning from ear to ear.

I brought her back to the barn and she just wanted to snuggle. No more cranky face.

There will be days when I despair again but for now I'm going to enjoy the ride. 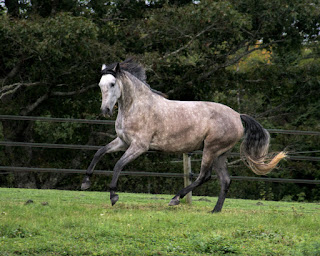