So yesterday Carmen crossed a line.

I've come to realize that having a five year old mare is LOT like having a 15 year old daughter.

Cynthia was coming to ride. It was also a windy day and she's back in heat (not sure if she's ever out of it to be honest). I lunged her earlier thinking that it would help later. And she was very well behaved. Even with Irish running around having a tantrum in the field.

When Cynthia came we got the horses ready. Carmen was well behaved on the lunge. She was obedient and listening. So I got on. We walked down the ring and she balked. I gave her a tap and she kicked out and kept going. She then tried to go down by Irish. When I kept her on the circle she began to object. And then she threw a tantrum. She opened her mouth and locked her jaw and I had no steering. I quickly realized that I had no control and that she was escalating. I hopped off and put the lunge line back on.

And we went to work. She kept trying to go to where Irish was. She even ran backwards dragging me with her. I was determined that her ass was to go where I wanted it to go and that there was no other answer that she could give. The only words I wanted to hear from her were 'yes' and 'ma'am' . Did I mention that it was a hot day? In a few minutes we were both dripping sweat. I kept it up until she was listening to me and ignoring Irish and the blowing stuff outside of the ring. I then got back on.

now in the past, after a session like that I would ask for a little and end it. Not this time. We were working. there were a few times she tried to run to Irish and a few times that she spooked at the grass and I was honey badger- I just didn't give a shit. We were circling, trotting, walking, whatever I had decided we were doing by god we were doing it. Slowly she began to work over her back and listen. I gave her praise when she was good and when she tuned me out I would growl 'listen'. By now Cynthia and Irish were done. They stood in the middle while we kept working. I asked Carmen to canter. We cantered by Irish and she wanted to stop. I urged her on at which point she executed a canter pirouette back to Irish. I circled us back and she did it again. This time I circled her back but before she could spin I halted her. Then I trotted her on and once past I picked up the canter.

I asked her to halt in the middle and she began to walk sideways to the gate. I asked her to whoa and she blew off my aid. So fine, if you want to sidepass horse, then by god, let's sidepass. We went to the right, then we went back to the left. And then to the right. And then left. And then I asked her to whoa. she did it again. The third time we repeated the above she stopped. She thought about going sideways but I felt her thinking 'oh just screw it'  And she stood still. I walked her forward 10 steps and  got off. I had to hose her off after and her saddle pad was soaked. I peeled off my riding gear.

Today I rode this morning. I brought her in and asked her to ground tie in the barn. which she did. She didn't move as I got her ready. I put the flash on her bridle. If you read my blog you know that I'm not a fan of flashes unless they are needed. I decided that I needed it so that I could prevent her locking her jaw and carting me around. I fastened it loose enough to get a finger under it so that it would only come into play if I needed it.

I lunged her in the bridle and there were a couple early discussions on direction and pace but we worked through them. I got on and we went to work. I have to say that she started a bit spooky but ended in a better place. I got us working in a 20x40 metre area and we worked on changes of rein and bend. I found that I could be much quieter with my hands because she couldn't open her mouth and avoid the bit. This led to much less head tossing and rooting. At one point an ATV was in the next field. I decided that I was still honey badger (honey badger reference) and we were still in the ring. It was a much better ride than yesterday. In the end she was tuned in and listening.  We walked all over the ring with a stretchy long stride.

It wasn't that she didn't worry about stuff out of the ring but it seemed that she is finally beginning to realize that who is in charge is actually not a negotiation. It seems that I need to be certain and firm. Not mean, not harsh but very very clear. 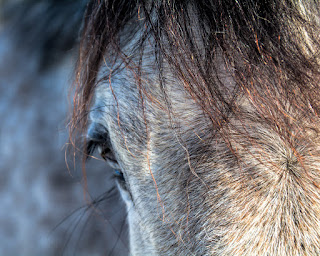 One day I will review this blog and realize how far we have come. I just have to hang on until then,
Posted by TeresaA at 12:30 PM