A few days ago Oakfield Farm got a new addition. Allow me to introduce Chester: 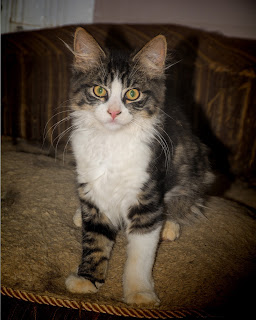 I have come to terms with the idea that Simon is most likely gone for good. While I hope that he will come home when my friend Sherry told me about these kittens at her father's barn I decided to take one. While initially quite shy, Chester is quickly becoming a cuddle bug. We have a little nest set up for him in our main floor bathroom/laundry room. He spent a couple days hiding behind the dryer but I was worried that that could lead to problems so I set up our X-pen to keep him away from the appliances (this point becomes relevant to the story later).

This morning Ed informs me that he thinks he heard a rodent in our basement along the duct work. We figured that it was a mouse and that we would keep Martin in tonight to get it. While sleeping in  guarding the barn is hard work, I'm sure, we needed him inside.

We were both outside this morning and I came in to change my footwear and wash my hands. I was surprised to see a rather large field rat run from the stairway to under our TV stand. In fact I was so surprised that I let out a shriek. I went outside to talk to Ed and get Belle. Belle is a superb ratter even though she's an Australian shepherd.
Me: Ed, you have to come and help there's a big rat under the TV stand.
Ed: A what?
A rat.
Not a mouse? he said hopefully.
No. A rat. And a big one at that. I added.
I finally got him and the dogs in the house and on point around the TV stand. Armed with a broom I directed Ed to slide the stand away from the wall. The rat comes running out and in the melee bites Belle who lets out a yelp.

The rat runs under the couch. We move the couch and more chaos ensues as it heads into the dining room and under the china cabinet.

It's a fast little bugger. I'll give it that.

I sweep the broom under the cabinet and it runs to the far wall and under our liquor cart (you know the kinds with wheels) with the dogs in hot pursuit.

Ed is not looking happy. He hates rats.

I have the dogs poised on each side of the cart, I'm guarding the doorway with my broom. Ed says 'open the door so he can go out'. It's a practical idea so I do.

We move the cart to find....nothing. We move it again. Still nothing. We look around. No rat. I decide that it must be on the shelf hiding behind my Baileys. Gingerly I start moving out the liquor bottles. For two people that don't drink hard liquor we have quite the collection. It becomes apparent that the rat is not there and we are flummoxed.

The dogs refuse to leave the cart so we're sure that it's there. I'm wondering if it has some sort of superpower, like invisibility or dimension shifting. Then it hits me. I look at Ed.
Open the drawer I say. (there's a small drawer in the cabinet for cork screws and such. Or in our case junk that we don't where else to put). Ed looks at me and reluctantly reaches forward to open the drawer. I know he thinks I'm wrong and is terrified that I'm right and that a pissed off rat (perhaps with superpowers) will leap out and rip out his throat.
He leaps back a bit It's there!  and there's a hint of wonder in his voice.

With that the rat leaps out and dashes out of the dining, past the open door (so not so smart then) and into the laundry room/bathroom. I go tearing after it and shut the door aha! I have you trapped Mr. Rat. Or Ms.

The rat has run through the cage bars and behind the appliances. I realize that I'm all alone. Ed and the dogs are on the other side. I open the door and d'Arcy comes in but Belle is thinking about his bite and has decided that she will stay out. Ed looks like he's thinking of keeping her company. I order them both into the bathroom.

As I lean down to pick up the cat food dishes d'Arcy comes barreling backwards knocking water, catfood and kitty litter all over the place. I hop up onto the washing machine with my broom to harry the rat out from behind.

Picture this if you will: a bathroom/laundry room with a large cage, chunks of cat food and kitty litter all over the floor, me perched on the washing machine with my broom, the dogs on guard by the dryer and Ed with a look on his face that indicates he would pay cold cash to be anywhere else at this moment.

'where's the kitten? I ask.
'worry about that later'  is Ed's advice.

I can't see the rat so we decide that it's under the dryer. Ed tips up the dryer and I sweep under it with my broom.
I got it! I yell triumphantly. But it turns out to be a large (rat sized) dust bunny (before you judge me, how often do you sweep under your dryers???).

I sweep again and hear a deep growl (Belle) and a snap. I look and she's killed it. As I go to take it she picks it up in her jaws
Belle: Hey that's mine! I got it!
Me: yes you did you brilliant girl. I will take it though and give you something tastier.
She lets me take it and d'Arcy snatches it out of my hands.
d'Arcy I helped. I get a piece too!
Ed: dog's are gross

I take the very dead and now somewhat soggy rat, outside to dispose of. I give the dogs a treat and then clean up the bathroom.

I find Chester- he was under the china cabinet the whole time. I don't blame him for not getting the rat- it was almost his size.

There's never a dull moment here at the farm but I wouldn't trade this life for any other.
Posted by TeresaA at 5:00 PM