Chapter 6: Steele and I go to school

The pinnacle of this whole experience was to participate in the clinic with the judge at the end. John MacPherson (our judge) is an excellent judge and a terrific teacher. I figured that it would be good for Steele and I to participate.

Of course that decision is easy when the clinic is weeks away.

To be honest I did not sleep well sunday night. My brain was whirling with plans and thoughts about what time to get ready, should I braid? (yes), what if they fall out? (they won't), what do I say are my goals (revised multiple times), what if I freeze and ride like some sort of lump (don't), what if I forgot how to ride? How can I make sure that Steele has a good experience.... stuff like that.

The upside to that is that I did not oversleep anyway. I was early to the barn and gave Steele his food. I then took him out and put in his braid, using the waxed string that Nichole gave me.
See how cute he was:
I was thrilled to see two of my friends arrive to help out. Then a fan of Steeles blog came by. With their help I calmed down and we headed out to the ring. Steele and I were first and I wanted to lunge him first. More people came to watch. 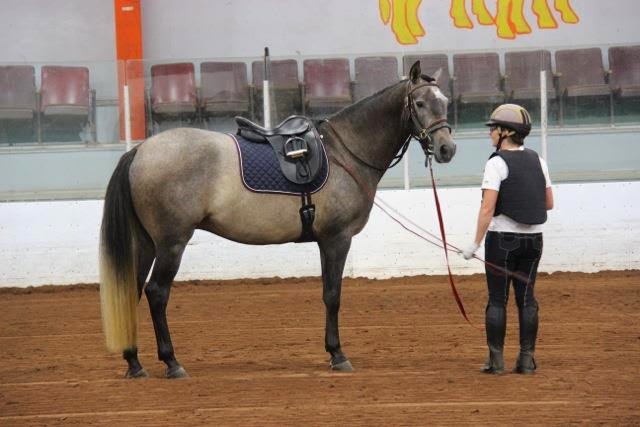 He was very good about staying focussed on me. After about 20 minutes I mounted. I put my crop down at the main entrance because I wasn't sure that I needed it. I walked a bit and then noticed that John had arrived. I walked up and introduced the two of us. I explained that Steele had been backed in May and that this was his first time off of the property. I told him that I wasn't looking for miracles but that I wanted some pointers on how we were doing and some things to work on over the fall months.

And then we went to work. John had me go onto a 20 meter circle. The idea was to keep my hands low and to ask him to trot a few strides and then walk a few strides. But the transitions had to come from my seat- no touching of the bit. So the exercise was trot-walk-trot-walk- switch directions and repeat. I didn't understand the purpose of the lesson at first but rather than question I put my confusion aside and applied myself to the lesson. As we proceeded it began to come clear. As went along I could feel him become more balanced and listening. My keeping my hands low and quiet it allowed Steele to lengthen out his neck and reach for the bit.

The next part of the lesson was using my seat to keep the pace steady and rhythmical. I was matching my posting to Steele's rhythm  but this was making him not balanced. As we went along the penny began to drop. By my setting the rhythm this allows him to find me and become steadier and more balanced. Aha.  As we were going along there were periodic flashes from cameras. I had to smile at Steele's 'paparazzi'. He did not seem to care about the flashes at all. He was a little worried about the setting but when he lost focus he would always come back.

Here are some photos that people were kind enough to send me:


After we worked on walking, trotting, steering, balance and rhythm John asked me if I wanted to canter. I smiled at him and said 'sure. what could go wrong?'

So we went back to the 20 meter circle and worked on trot-canter. We started to the right because I explained that it was his easier way. I got the trot moving forward and asked him to canter. Which he did- but with the left lead. John said not to worry about that, quietly bring him back and try again. After a few tries we got it. The problem was keeping it. Which is pretty consistent with home. I could him going for a bit but then he would just break. We also did work to the left.

However, while we were not perfect by any stretch of any imagination we both did our absolute best. After a few circles we called it a day. I was happy with what I had done and learned. Steele was sweaty. John stood and spoke with me for a bit. Steele stood very still waiting for his accolades. However, John kept talking to me.
Steele edged over a bit.
John ignored him.
He shuffled over a bit more and stuck his head on his arm.
"hello. I was really really awesome. I deserve some attention"

After we were done John gave Steele a pat and said "this is very good horse. He also has a fabulous brain"