Spring is in the air.

As you may recall last year I introduced Steele to the concept of lunging. A few weeks ago I brought him out the ring and he was perfect. We worked on walk-halt-walk and walk-trot-walk. He caught on so quickly and seemed quite proud of himself. I kept the session short and sweet so that it was all positive.

Today was my day off. I work extra time so that I have every other Monday off. I love having them off. As luck would have it the weather was actually spring like. I checked out the riding ring and it was pretty bare. That's what I love about rubber- it helps to thaw the ring so that it's usable so much sooner.  I rode Irish first. He did pretty good. I'm trying to figure out what he can do without straining or stressing anything. He definitely felt 'springy'. But because he's 13 and out of shape it doesn't last too long and he doesn't get too carried with it. Steele hung around in the paddock.

Then it was Steele's turn. I brought him in to get him ready. At Christmas time I brought him a set of boots to protect his legs in case he gets silly on the lunge. I put them on and then go myself organized. It was cute- he picked up each foot in turn and waved it about with a look of curiosity on his face. He wasn't upset just not sure.

I led him out of the barn and headed up the hill to the ring. Irish came trotting by us and Steele was NOT impressed that he wasn't allowed to go too. But he listened and stayed beside me, but he was definitely 'up'. He pranced beside me. This time I knew I wasn't in for the calm and easy session as last time. As I prepared the line and whip he stood still beside me but I could feel the vibration. When I let the line out and told him to 'walk on' he interpreted that to mean 'engage in full self-expression'. Unfortunately the ring is not fenced yet. Once it all thaws Ed is going to enclose it for me. That will be helpful for days like today. But for now I need to make do with what I have. While I am not the most graceful of lungers I do have a pretty good idea of what I'm doing. The trick with a horse that it is building up a full head of steam is to not try to hold them because that can lead to a fight or, heaven forbid, a wreck. So gave periodic tugs on the halter with the lunge line to keep him off balance and going around me while moving with him. He tried to run off a few times and I just gently brought him back and when he did told him that he was wonderful. Other things that he tried out was to roll (nope) or slam on the brakes and go the other way. A little body language and judicious waving of the lunge whip convinced him that neither was a good idea. I could see that he was not impressed with me impinging on his freedom of expression. Oh well. This is just the start of the many things he will have to learn.

We were settling into the rhythm of the work when something caught his eye in the distance- he slammed on the brakes, his head went to it's full height, his eyes were huge and his ears were so far forward they practically pinged. He then started to snort. This is a really loud sound that horses do when they are alert and considering flight. I don't know what set him off- there could have been deer in the next field or he heard the cow or Belle was chasing mice in the grass. I tried to get him back to work but it wasn't working. His tail was up and his trot was about a foot off of the ground. He would scoot every now and then and I was glad that he had the boots on. I think that there were a few caprioles in there: 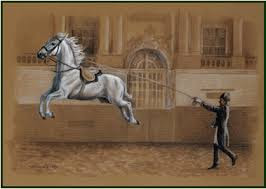 I realized that the work was not helping so I asked him to 'whoa'. I then went back to our leading exercise work from last year. I figured that this being 'old lessons' would settle him. And it did. As I walked beside him I concentrated on keeping my body language calm and gave a few deep sighs. This worked well for him. I then decided to walk him over by the 'scary place'. This could have backfired but I had a good sense of it so over we went (I did have a plan if it all went south). He stood stock still staring. I quietly blew and rubbed his shoulder. He then blew gently and lowered his head. This is the opposite of what I would have to do with Irish. If he's all upset over something and I let him look at it he gets worse. If I work him through it and stay in charge then he settle.

After a few minutes I walked Steele away toward the top part of the ring next to Irish.

Through all this Irish was riveted. I could see him watching and I'm pretty sure that he was saying things like 'that's good kid. Try to get a bit more umph into it. That's it!'

At that end of the ring we went back to work. He did so well- walking and trotting to voice commands. There were a couple times when he tried to reverse but I was able to head him off. After a few minutes I told him 'whoa' and then walked up and rubbed his head. He nuzzled me and looked  a bit tired from all of it. We walked back to the barn and I gave him a nice groom. I then took him out to let him loose. I fully expected him to go bursting out to Irish but, no, he turned around and gave me a nuzzle. And then hung out in the barn while I put stuff away watching me.
How cool is that?
Posted by TeresaA at 2:46 PM