In my lessons with Jane she has continually reminded me of the importance of rhythm and how often Carmen loses it. In full disclosure, while I believed her, it often didn't feel like the most important thing happening in the moment. So when Carmen spooked and Jane told me she lost rhythm I felt that I needed to focus on dealing with spook, not the loss of rhythm. I think in my head I figured that the key thing was the relaxation.

I was sure that as other things fell into place it would just magically be there. I wasn't seeing it as a means to get those 'other things'.  But at my last lesson, it finally bubbled up to me as, you know, maybe something I should focus on.

So for the next two weeks I put establishing and keeping a rhythm in the forefront of my mind.

And, yeah, that was eye opening. I became truly aware of how often the tempo of her gaits shift. And because I've been accepting it for so long, it is not something that will change quickly. If you follow learning theory, I have moved from 'conscious incompetence' (you don't know what you don't know) to 'conscious incompetence' (I realize I'm not doing it). I do hate being incompetent.  In the past this would have really frustrated me and lead to not very good rides as I tried to fix it right now.

I've been working on not always lunging before my ride. I will take my stuff up in case I need it. I haven't had to use it yet. But I also pay attention to how she is before we go up to the ring.

But now I know enough about learning theory to know that this is a very positive step and will lead me to improve. The problem hadn't changed, but now that I was becoming more aware, I could take steps towards competency.

***Carmen: sorry guys, she does like to nerd out. Honestly, does she have to think quite so much?***

It felt like I was making progress and that Carmen was responding to it. I had a lesson booked for early Sunday and I was curious to know if Jane would find an improvement. The weather was clear but cold enough that I had to dig out my winter riding togs.  I shared with Jane what we had been doing for our homework and we went to work.

It was an awesome lesson. Carmen was right with me and we were able to get to work. Jane noted an improvement in my inside hand (yay). Carmen was not sure about forward so Jane had me ask and then release so that Carmen could carry herself. At first Carmen just kept dropping out of the gait as soon as I took my leg off. Jane told me that was because I was doing all the work and Carmen didn't have to be responsible.

Once we had that we had some really nice trot and canter work. Jane was getting after me for my leg slipping back, rather than staying at the girth. I finally had the realization that putting my leg on at the girth helped with our lengthens. So that was cool. Once I realized it our work became much more consistent and she actually lengthened her stride instead of going faster.

You may notice Jane has a JRT in a carrier on her body. It is the cutest thing- she just hangs out and enjoys herself. Guinness has zero idea of what to make of this.

Jane has been working on getting our transitions more balanced and uphill. Which means I need to change how I do them. Carmen has feelings about the change, which is totally fair. But in this lesson I could feel her start to understand. Our transitions are feeling much less flail-ly than in the past. 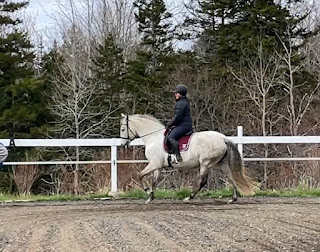 By keeping the rhythm steady our transitions improved and so did Carmen's relaxation. Here's some canter video- it is our right lead (which is our worst one and often felt very unbalanced). I love how she's able to keep a steady rhythm through it.

I am seeing on working on something as 'simple' as a steady tempo leads to her feeling better in her body and softer. And happier. It makes her less unbalanced and able to focus more on my requests. At the end of lesson I was pretty sweaty. It was hard work but all three of us were feeling pretty pleased with the results (four if you count Dottie the JRT).