I've been really enjoying my rides on Carmen these days. I'm feeling excited about riding and that feeling stays after and in between my rides. I've noticed a big upswing in my confidence as well.

Carmen is progressing as well. Don't get me wrong, she's still, well, Carmen. But I think that I'm being more clear and persistent and she's responding to that. I find that now that I'm really focussing on the outside rein and keeping it there while letting it follow that she comes back to it sooner. I've started to notice that, at a certain point, I want to give up and let go. And that's when she has the freedom to skedaddle. Because I'm not giving up she's figuring that out and comes back to me more quickly. Often with just a little pulse.

I've also started to notice that Carmen has a 'tell' before things start to fall apart. When she's starting to think that she might want to exit stage left (or right depending on what rein we're on) she gets marginally heavier on the inside rein. That heaviness increases as her tension mounts and my instinct is to take more of the inside rein and loosen the outside. Now I over ride that impulse and take more outside and then ask her to soften to the inside using inside leg and pulsing the inside or opening the inside rein. I have to make sure that, whatever else happens, I make sure that the outside always has a little more pressure. And, miraculously, she softens, drops her head and breathes out and we carry on. Nine times out of ten. Which I'll take.

But wait, I hear you ask, I thought you said this was a lesson recap?

You are right, my patient reader, it is. I just wanted to share a little as a precursor. This time for my lesson Julia was watching and took a ton of video and photos.

Our lesson starts pretty much the same- I recap what's bene happening and what I'm struggling with. Mostly it's about keeping her straight or shoulder fore. Although it's improving. The biggest issue is that when Carmen wants to look outside she actively resists. I can't let her not give to the inside but I have to soften even before she does so there's something to relax to. 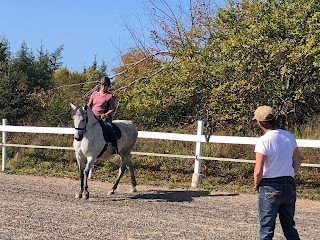 Jane has been helping me feel when Carmen gets fast in front and dragging her front end along (like a slinky toy). She gets me to slow her down and the let her out. It takes a lot of concentration. But as we go along her ears get floppy and she follows the rein to drop her neck. According to Jane I'm getting better at being elastic with my rein so that I'm not holding and then dropping the contact.

What is also much better is our transitions and gaits.

It takes a lot of work. Like a lot. But it's working and I really love it.

There's a lot to love about this photo, even if she's curling behind the vertical. Right after I was told to soften to let her out a bit.

Jane makes us work hard while making me feel like we can definitely do it. Even when we fail: 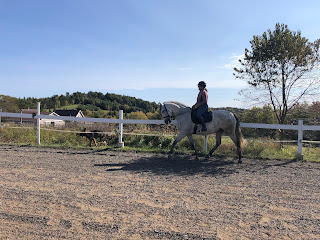 You may notice that I'm back in my dressage saddle. I'm finding that I feel very solid in it. The spanish saddle is still there for me and it's clearly helped me with my position. 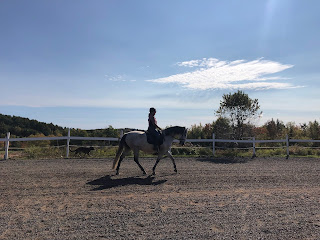 The weather was hot (for October) and poor Carmen was sweaty. But also working.
At one point she bumped my leg against the rail. It happened to be the board that's split and held up by a fingernail. Of course that became a real threat to Miss Carmen. But no matter- we were to keep riding by it in shoulder in.
This is giving me tools that I know will work at other situations (like shows). So I love it, even if part of me is inside yelling 'danger danger, red alert.
Carmen's go to when she stressed is to throw her haunches in. It's improving but still there. But here is some canter- trot work and I love the lack of flail. It used to be that the right lead canter would throw me to the outside but now that feeling is gone. In the video you can see her haunches wanting to come in but responding to my ask for her to come back. You will also see how quickly she settles into the trot instead of falling endlessly on her forehand.
We finished with a wee bit of half-pass. It felt really good.
At the end we were both sweaty and tired. But I was so happy. I feel like I want to eat up all the learning and demand more.
Posted by TeresaA at 8:39 PM