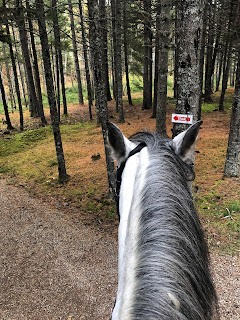 This weekend I decided that Carmen and I were going to head out and have some fun. I've been wanting to get back to Coveside for a trail ride for a while. I realized that I needed to stop saying I wanted this to happen and actually make it happen.  I begged talked my friend Tanya into coming with me and we arranged to meet up with Nancy and have some much needed forest therapy.

It has been about 2 years since I went to Coveside so I was quite excited. I had the trailer hooked up and packed the day before. During the night, though, the wind picked up. When I headed out to feed the horses in the morning I was almost blown back in the house. Ed said 'you're not going to haul in that are you?'

"Probably not' I muttered. But after I fed and turned out the horses the wind began to settle to a stiff breeze. I hummed and hawed a bit but decided to go. I'm pretty sure that Tanya had doubts too but we both decided to not ask each other and make it okay to back out. When I went to load Carmen she began to freak out on the way to the trailer. I looked and saw a big ball of plastic that Ed had left on the lawn and it was blowing around. I called him to gather it up and decided to not kill him (I get points for that, right?). At the trailer Carmen loaded right now. The drive was okay but at times I could feel the wind gusting against the sides.

We arrived at Coveside at the same time with Tanya and put the horses in a stall while we parked and then tacked up. Tanya's horse, Suzi was quite excited and started off going a bit sideways. Carmen looked at her.

Carmen: maybe she knows something we don't and I should be worried.

Carmen:  as long as I can outrun her I guess it'll be okay. Let's let the other two go first, just in case.

And that was that. Carmen was quite happy to bring up the rear and we did the ride almost completely on the buckle. I did pick up contact when we went by a field that had horses and deer. She picked up her head and tensed. I just focussed on keeping a soft contact with my hands and seat and she settled right back.

The trails are so beautiful and well groomed. I could have stayed there forever.

Carmen became more and more relaxed as we went along. I watched her ears get more and more floppy. I even was able to drop the reins and take a short video.

At times the wind would penetrate the woods but for the most part it was cool but not that bad. There were  a few hills that really worked the horses butts. The ride was about an hour. We only walked which was perfect for our first trip out. I remembered to start my equilab app so I could see the map. That's my favourite part of the app.

It was a great day and I'm so glad I went. Carmen was happy to just follow along and enjoy the woods. I swear that she likes to look around and breathe in the air in the woods. Some days you just need to get in touch with your inner 12 year old and have fun with pony friends.