It was going to include how I did on my goals, what I learned.

It was going to end on an optimistic note, with hope for the future. I was hoping to have some sort of uplifting conclusion.

Today I looked out my window, and to my horror I saw a strange dog in my paddock chasing one of my chickens. I bolted outside with Guinness at my side. at the same time I was trying to call Ed to tell him to come help.

When I got outside Ed had the dog in his grip and there were feathers everywhere.

I saw one of my chickens laying on her back and in clear distress. I ran over and gently picked her up. She looked at me and died. Ed explained that he had seen the dog with a chicken in its mouth and he tackled it. The chicken ran into the barn. I put the dead chicken down and grabbed a lead for him. The dog was from next door. I found Amy cowering in the farthest corner of the barn. I gently picked her up and she was clearly in shock. I took her inside to the bathroom and contacted my 'chicken friend'. She advised putting her back in the pen since we couldn't find any injuries.

Ed returned and we began to look for the other two. In the meantime the neighbour came over. He was so upset about our chickens and offered to replace them. I felt bad for him. This was a new dog for him (a bird dog) and they had an invisible fence. I suspect our chickens wandered over that way and the instincts kicked in. I tried to be kind but I needed to find my missing girls. I knew one was okay because I had seen her run behind the garage but I didn't know where the fourth one was. I walked into the woods calling her and looking. On my way back up the driveway I spied Jo scratching in the lawn. I picked her up and carried her to the coop. Ed found the fourth one (Beth) and she was missing a few feathers but otherwise okay.  Which meant that it was Meg that we lost.

Once all the girls were in the coop we buried Meg and came into the house. Ed asked if I was okay and I burst into tears. I was sad about the chickens. I also know that seeing a dog chasing one of my beloved animals in the paddock had brought back some past horrors.

I know that free-range chickens are at risk. It's not that I don't worry about predators. But they are so happy wandering. They always join me in the ring when I'm riding and follow us around outside. I was quite attached to my 'girls'.

I spent the rest of the afternoon sitting on the couch and doing nothing.

This year has been hard for everyone. I cannot wait for it to be over. I know that 2021 is not going to be rainbows and kittens. But right now I am out of resilience and just making it through this year seems like enough.

I know that tomorrow I will wake up and start over. Later on this afternoon my three chickens were yelling at me to let them out of the run. Even Amy (who is missing all her tail feathers).

I think I need to take some lessons from the chickens.

But for now I got nothing. 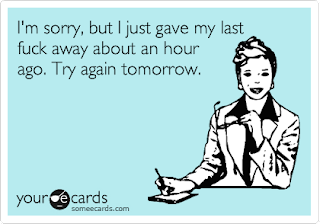