My rides recently have been a bit, well, mercurial.

Now it's not unusual for Carmen to get a bit anxious when all the grass and leaves are in and start blowing in the breeze.

I also know that her nature is to be reactive and sensitive. I have zero expectations that one day she'll be completely zen and relaxed. To me, that is as unrealistic as expecting an person with anxiety to 'just get over it'.


That said, I also do not put up with her being a completely irrational during our rides. The trick, of course is to find a balance. I try to figure out where she's at and meet her there so we can work through it.

That works the majority of the time.


My riding has improved quite a bit- I say that without arrogance or pride, it's just a fact. So the things that would unseat me or frighten me don't so much now. Shanea tells me to keep my legs on and not back off- that's when she gets me. Carmen has a powerful neck and shoulders and she knows how to use them. It used to be impossible for me to stop her but not so much. Not that she doesn't get away but it's much shorter lived.

This week I had a ride that was lovely and then a ride where she was a complete and utter cow. And I don't say that lightly. She was fixated on the far bushes and everything I asked was just too much. She was hanging on the bit and using that for leverage to cart me all around. I had to get quite harsh at times to get her to stop (like I'm glad there's no media harsh).

Before you start thinking that I was picking on a scared horse, let me stop you. Carmen has three spooks:
#1. genuine startle and frightening. When this happens so looks to me ' OMG, what do we do?' And when I say 'just this' she settles and listening.
#2. I'm tired and want to stop working. This happens because in the past her behaviour made me back off. It doesn't now and this rarely pops up and, when it does, we work through it pretty quickly.
#3. Anticipatory: it's like she comes out looking to worry and then, when something happens (like a goldfinch flying by) she will give a big spook and then bolt. In this mood she can become 100% fixated on an area and becomes quite unrideable.

#3 was what I was dealing with in that ride. I wasn't even trying to get her to go near the area of worry. I was simply riding her in a circle but she was so fixated and I had zero attention. When she couldn't spin and bolt she would hang on the bit.
From our last lesson, working on half-halts

I picked up a canter on a 20 metre circle and every time she became strong and tried to cart me off I would turn her in a 10 metre circle. After numerous circles (omg, so dizzy) she finally breathed and softened and we could ride.

I halted her and she waited for me to dismount. When I didn't right away she began to paw. I took my dressage whip and every time she pawed I snapped her on the leg. She stopped and then began to try to pull the reins from my hands. I bridged the reins and still sat. Finally she sighed and cocked a foot. I sat a little longer and then hopped off.

In the barn I had her ground tied while I got the hose ready. I saw her looking out the open door.
Go ahead I said, if you leave I'm not chasing you. You are welcome to go find someone else who will look after you better than me.
She breathed and then said fine, I guess I'll stay.

What I realized was that our issue was one of attention. Carmen was attending to me when she chose. When she was interested in something else I was far down the list of things to attend to. It was like I wasn't even there anymore.

The next day I took her up to the ring to do a groundwork session. The goal was simple- to have her attend to me and, when distracted to respond to my request to me. I used her ears as my cue. If the nearest ear flicked to me when I asked I would stop my demands. If she didn't respond I upped my ask. As Tristan would say 'ask a question that deserves an answer'.

It was pretty simple, I had her on a circle. when she fixated on something I gently lifted the whip towards her. If her ear flicked, it went back down. If it didn't I immediately stepped towards her, disengaged her hind end and then sent her back.

It was hard work. I had to be really consistent and very very clear. I played with increasing the pressure but that seemed too gray. So I had it very simple- ask soft, ask strong, get response, stop, rest, repeat.

Today, before I rode I repeated the work from Monday. Clearly she remembered- her shift of attention  to me was immediate and fast. When I rode I kept my crop with me so when I needed her attention I waved it and her ear flicked back immediately. The one time it didn't I disengaged her hind end and that was that.

The nifty thing was that by the end of the ride I just had to gently squeeze a rein and her ear would flick back. Even when worried about things, by having one ear on me her tightness and stiffness was not as bad. That's because horses are not good multi-taskers. Of course neither am I.

It's nice to know that she realizes I'm up there.

And one more thing: My son returned from the middle east earlier this month. He had to quarantine for 2 weeks but that was over last week. He and Ripley were reunited and it was so sweet.

If this doesn't warm your heart you need to seek help 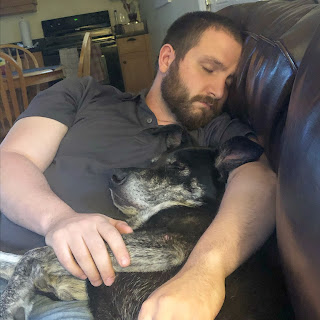