If you follow me on IG you will see that we have new residents at Oakfield Farm.


Let me back up a bit. When we first moved to the farm people would say 'are you getting chickens?'
'YES' I would say at the same time Ed would say 'NO!'
I overheard him one day talking to a friend:
Friend: 'Are you going to get chickens?'
Ed: 'Well Teresa wants them but I don't....So you know what that means.'
Friend:  'you're getting chickens'
Ed: 'yup'.


However, chickens were not a priority, there was so many other things to do. Now Ed is getting ready to retire and we were planning a big trip in September. The plan was that we would build the chicken coop this year and get chickens next.


Of course you know that didn't work out as planned. COVID-19 meant our trip was cancelled (well moved to next year) so I decided I wanted to get the chickens this year. Ed thought that wasn't possible because a lot of people place orders in May. I knew better though and, sure enough, through a FB friend (thanks Sarah!) I sound someone with 2 week old chickens to sell.

I was so excited to get them- I just love chickens. We're starting with just four little ones. We were so worried that they would die on us. We've borrowed a heat lamp and set up Guinness' dog crate in the garage. We've put a thermometer on the cage that connects to a receiver in the house so we can monitor the temperature. We set up a cage outside for them to enjoy the weather when It's nice.

The chicken coop is not completed- turns out that COVID-19 has also led to a real shortage of chicken wire.  Every day (when it's nice out) we carry them one at a time to the outside pen and then bring them in at dinner time.

I just love watching them. They are so adorable scratching in the dirt, fluffing their feathers and doing little flights. 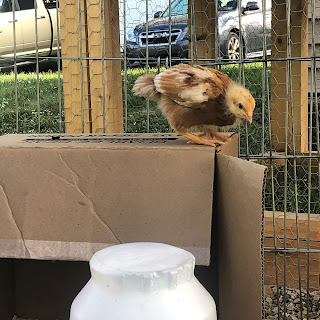 Their feathers are coming in but still have down on their heads; making them look like little vultures.

The second day we had them I had to bring the tractor out of the garage. I knew it would startle them but thought that they'd be safe in the cage. I started it and, sure enough, they startled. I left and was doing my chores when I got a text from Ed: "why are there only 2 chicks?'

I dropped my pitchfork and ran to the garage. Somehow, two of them managed to squeeze through the bars of the crate and were hiding under Ed's work bench. he managed to get one but the other was way back in the corner. I moved some stuff, grabbed a bucket and crawled as far in that I could get. I managed to scootch her into the bucket, peeping like mad. As I turned the bucket up and began to pull it towards me a paint bucket fell off the shelf into the bucket. A loud SQAWK!  came from the bucket and then silence.
Shit. I killed it.

I pulled the bucket out and lifted out the paint bucket. Two bright black eyes peered at me. The paint bucket only fell part way in so I put her gently into the cage that end then wrapped chicken wire around.  Fortunately she seems to be fine. But what are the signs of a concussion in a chicken anyway?

With any luck we'll have some eggs this fall.

I'm sure you're wondering if they have names.

Of course they do. But I needed to figure out some good names. I played with some cute names but nothing was really coming to me. Then one day I was laughing at one of them who is quite bold and she ran at me flapping.

I realized that her name was Jo.

Another one is quite shy and often hides. Her name is Beth. (maybe she's not shy, maybe it's a head injury but I don't know which one was stuck under the bucket.

There's a pretty little one that has blonder feathers than the other. Her name is Amy.

And the last one is Meg. She just bustles around and minds her manners.

Pretty sure that you have guessed the theme- Little Women. I loved that book growing up (still do really) and if you haven't seen the most recent movie you should- it's really well done.

Carmen is a little wary of them but Irish is curious. Of course he takes his role as official farm greeter very seriously.