January is always a difficult month- the weather is cold, snow starts in earnest and spring seems so far away. However, we have had a couple warm(-er) days this week and the ring thawed out. Julia was coming out too.

Riding time is so hit and miss in the winter that it's difficult to know what to work on. Carmen is not a horse the enjoys the same thing over and over and I don't want to push her physically when her condition is not so good. So I decided to set up a series of obstacles for us to play with. That way we could play and not get too caught up into schooling. 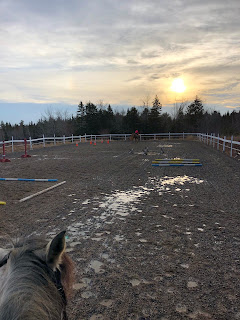 I set up a box with poles that allowed for 1 canter stride between, a gate, cones, some trot poles and a gate. There was a puddle in the ring and I decided to use it for an obstacle:

Irish was quite excited to be up in the ring. which for him, means that he was totally ADHD. Julia had to work hard to get him to focus. But damn, he looked great. Look at him go!


Carmen was pretty calm, but when I was on she was worried about troll corner. It gave me a chance to work on my calm seat and not fall into the tension cycle. None of the obstacles gave any trouble, although both gave the water the hairy eyeball. But it wasn't a huge deal.

Carmen and I worked on her backing up- she's starting to do it without inverting and is very pleased with herself. Our process of doing something new, getting a ton of praise and leaving it seems to work well with her.

After we hosed down their legs and bellies which were muddy and turned them out.

The next day I brought Carmen to ride by ourselves. She was really good with everything. I've been working on her stretching and bending and it's paying off. She definitely is more adjustable in her trot and walk to shorten and lengthen.  Our canter is less so but I need to be better with my seat to keep her with me when she tightens, not get popped out of the tack.

I only rode for about 30 minutes on Saturday. She was right with me and did everything I asked. Near the end she was orienting to the woods so I figured something was there.

In the barn she was even more oriented. I turned her out and was cleaning out the paddock. Both her and Irish were riveted to the woods and then I heard two shots in close succession. Scared the crap out of me. Then I heard dogs. After about 20 minutes I heard two more shots, sounding closer. I realized that it was still rabbit season so I suspect that was what was going on. Another lesson in listening to your horse- they knew something was going on well before I did.

Today it's snowing so who knows when I can do it again. But that's okay- I'll take advantage when I can.