Neither Carmen nor I are patient individuals.

Johanna has zeroed in on this in pretty much every clinic. However, without her direct guidance I find myself approaching slowing down in the wrong way- basically using the reins to hold her in.

While it does make her slower, it has some negative consequences:


Her feet would slam on the ground which is not good for her joints. Or mine for that matter. Since it felt so awful, I would give up and let her go, hoping that she would burn through her energy and relax. But fast, choppy, tense gaits don't feel great either. And it didn't really work for her. Irish responded well to being allowed to 'go' - he would expend his energy and then come down. Carmen does not - she escalates. 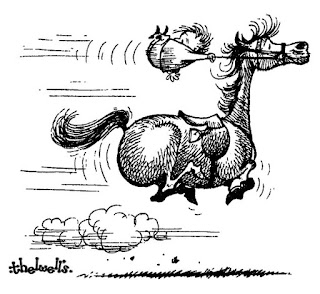 Since I can't have Johanna or Shanea all the time I've been working on figuring this out on my own.

The key is (of course) using the seat- not allowing her to go fast. But that's neither simple nor easy to communicate to an equine partner who has her own notions of what should happen.

Me: hey Carmen, here I am using my seat to ask you to go slower....
Carmen:  lalalalala, oh look a squirrel RUN AWAY.

Now that my seat is more stable it is getting easier to at least transmit the message. But the bit is there for a reason and I recognize that I need to use it to make sure my message is transmitted. And then let go. Not dropping it totally but not hanging on for dear life. Sometimes the rein is on much stronger than I would like but I'm getting better at having it like that only for a long as I need it.

The other piece has to do with myself. We all know that horses are mirrors and reflect back the energy we project. I too am really bad about reflecting back the emotion of those around me. If someone is being stressed or anxious I find myself picking up on that. So you can imagine how that works in a spiral for Carmen and I.

So I've been working on myself as much as Carmen. My goal is to slow us both down and not perpetuate the negative spiral. I don't always succeed but that's okay. Because when I do succeed it works out great. I hate ending a ride feeling like I just did battle.

Yesterday was a beautiful day and I was determined to ride. Julia met me at the barn and we tacked up the horses. I mounted Carmen and we headed off into the woods. A few days before Carmen led the whole way but in the ring she was a bit of a hot mess and I worked hard to get her to pay attention. This time I asked Julia and Irish go first. I had a looped rein with one hand and spent the hacking time working on having a quiet and following seat- unless she sped up. My whole demeanour was casual and relaxed. 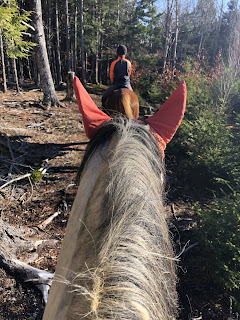 Back in the ring I could feel her tense up so I spent a lot of time just keeping a relaxed seat and soft rein. But when she wouldn't slow down I made her to it and then dropped back again. I kept the pace nice and slow.

Initially she was good but it felt more like she was humouring me rather than listening to me. So I kept working her. Our trot was slow and I played with the half-passes. She seems to really enjoy them and I could feel her shift as we played with them. At this point they are not really half-passes, more like quarter-passes. But they did the trick and she began more tuned in to me. In the end I dropped her rein and she dropped her head and snoozed.

I kept the ride somewhat short with the goal of having a strolling mentality then a work one. Our pace was not technically correct but it was quiet and true and I kept her relaxed. It feels good that I can influence her being relaxed rather than leaving it all up to her.

Horses. They make us face ourselves and grow.