Last weekend I attended a clinic on test riding and judging. It was a clinic designed to support educating judges but it was also to assist the riders in improving their test scores.

You may have read Austen's experience with attending an L Program. I thought that her experience sounded a bit, well, harrowing. But when I saw this clinic posted by The Fraser Equestrian Centre (a great place) and at Coveside (another great place. You may recall my posts on riding there on the trails) it was a no-brainer to sign up to audit.

But Teresa, I can hear you say, why didn't you sign up to ride in it?

Honestly, because at the time I had no idea where Carmen and I would be in terms of riding. I figured that I didn't need to throw a large chunk of money at a clinician to be told that bolting half-way through the test would impact my scores. This is also assuming that I would have been accepted anyway. Also, I knew that I would gain more by being able to focus on watching and listening and not having to care for a horse too.

Spoiler alert: it was awesome.

The format was as follows:
- Movement demo on the first day to show the upper level movements
-test rides: training through PSG.

The judge was Elizabeth McMullen (her qualifications include FEI 5*, EC/USEF Senior  and FEI young horse dressage judge). She sounds intimidating. But I actually quite liked her: she had a dry sense of humour which I really enjoyed.

Each rider rode their test while the judge scored and commented over a sound system. Then there was time for a coaching session focusing on some key 'issues'. This was supposed to be with the rider's coach (if he/she was there). Often though, Lib (she likes to be called 'Lib', not 'Libby') couldn't resist  and she would take it over and coach the rider.

Her comments were pointed but never mean. I liked her dry sense of humour. In one test a horse began to shake her head cantering down the long side and she commented 'needs more fly spray'. Another time a horse was quite enthusiastic in his canter departs. In reviewing the test Lib said 'he was dicking around in the canter depart. But you can't write 'dicking around' so you need to find a different way to say it'.

Everything always boiled down to the basics (doesn't it always?):

A lot of people had trouble with the stretchy trot. Which made me feel better in that I felt less alone. The exercise Lib used was to get a good trot on the circle, bend, and then exaggerate the bend. As the horse began to reach for the bit offer the a little rein and see if the horse will follow it down. If they do, reward. If not don't get upset, just repeat the exercise.


Not every rider had great rides. A couple horses had a bit of a melt down in the ring. Lib did not get on their case- instead she did her best to help them and to figure out what was causing the difficulty. A lot of time she urged the rider to be patient because the horse was trying to figure it out.

Every rider was given something to work on. Most of the times Lib was clear that there were no quick fixes (well except for being accurate). So she helped them to get things 'better' and then gave them some things to work on at home.

What was also great was how supportive the auditors were. Even though we were 'judging' and giving scores, everyone was on the side of the rider. During the coaching part, when a rider was successful (like with a good flying change) we all would cheer and clap.

I enjoyed the clinic so much and learned a ton. It was also lovely to not have to drive for 2 hours to audit a clinic. I took some of my learnings and put it to use in my ride Sunday afternoon. I shortened my reins and when Carmen sucked back put my leg on. It worked really well and I wasn't pulling any more. 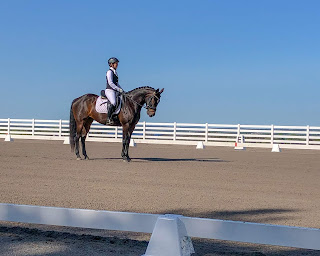 I am profoundly grateful to all the people who signed up to be the riders. They really helped us learn. I hope that they got something out of it too.