Most of the time I ride alone. When Cynthia and Julia were able to come regularly I didn't mind because I had company some of the time. The nice thing about returning to showing is it allowed me to reconnect with old riding buddies.

One of those people is Tanya. Back in the day she showed her chestnut mare, Duchess and I showed my chestnut gelding, Irish. It was fun.

Now here we are with new horses. Tanya has a lovely dark bay QH mare and has been cleaning up at the shows. They are both so steady and harmonious. Tanya also doesn't live that far from me (30 minutes by trailer) so I invited her to come and play with Carmen and I on Sunday: 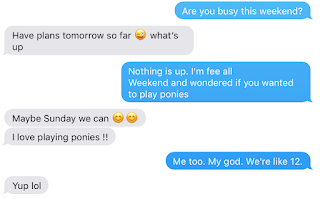 The weather all weekend has been fabulous- 25-27 degrees every day. It cries out to be enjoyed. Sunday morning I was walking the dogs when she texted that she was on her way. I took a short cut with the walk and headed back because I had been super lazy in the morning and still hadn't dragged the ring. I did my quickest drag ever and hurried inside to put on my riding clothes. I was just organizing the barn when she arrived.

Irish was so excited while Carmen affect indifference.
Irish: Oh hai! You are new. You are so cute. Are you staying? You'll like it here. I can show you where all the good grass is and we can gallop around. The servants are too bad, you just have to remind them of things sometimes. Do you know Duchess? I really liked her. She was nice. How's she doing?

Carmen:  Irish! Stop it. You're embarrassing me.

We let Suzi settle in her stall (I love having a guest stall) and we had a quick coffee/tea and chatted. Then we tacked up the girls and headed up to the ring. Tanya got to see how easy and well behaved Carmen is around home. Poor Irish was quite broken hearted to be left behind.

Carmen was a bit tense to start but with reminders about bending in the corner and the distraction of a new horse she quickly forgot to worry about things.

My focus the last few rides has been to really tackle the stiffening through the corners, especially when we are coming around the diagonal. I've been adding in 10 m circles in each corner. This has helped me to be laser focussed on the bend and using Carmen's anticipation of what is coming to my advantage. It's been working too.  I was quite happy with how well we have been working together the last few rides. Tanya also got to see how Carmen can flow when she's relaxed through the back. We practiced our counter canter and it was just so easy.

Suzi was looking really good too and didn't seem bothered by the new surroundings. There's a lot to look at from my ring and she seemed to take it all in stride. Tanya noted that she was more 'up' than normal. Which shows that how a horse feels to the rider and how she looks can often be too very different things.

At one point we stopped and rested the horses and had a chat. Carmen thought we were done and was not impressed by the return to work.

Carmen: um, what are you doing?

Me: we just had a rest and now we're going to do some more work.

Carmen: Excuse me, but I think that you meant to say 'great work Carmen, now let me give you an apple and turn you back out'.

I knew what was coming and I wasn't surprised when she gave a large spook a few minutes later. With a Ha! I'm on to this game Missy!  I put her in a tight circle and made her work hard and then went back to what we were doing. That was the end of that.  I finished with working on a few walk-canter-walk transitions. The walk to canter is pretty straightforward for her but the down one is harder and she trots a few strides. But I'm not too worried about it at this point- we were just able to actually canter straight in June.

After we rode a little longer we decided to go for a hack in the woods. Carmen was great about dropping the gate but when Suzi left before her she got in a snit and would not stand while I reached for the dressage whip (it's great for swishing flies). When I asked her to stop she decided to back up and after a little bit of this I said "oh back up? Sure. I love backing up. Let's go!' and backed her all the way to the end of the ring. This time when I walked her forward and asked her to whoa she stopped like a civilized horse.

Tanya wanted to play on the bridge and Carmen was happy to demonstrate. Suzi was not so sure about it but managed to get over part of it. We headed off to the woods with Carmen leading the way. Turns out that Suzi has not been on a woods trail before. I was proud of how good Carmen was leading the way and not being concerned about anything. Even a squirrel that ran across the path. I reassured her that it was armed and she appeared to believe me.


We stopped and I tried to take a selfie of us. Suzi did not want to stand still and I suck at selfies so it wasn't a total success:


We did a couple loops through the woods and then walked up to the barn. Tanya wanted to go back up and try the bridge again. I wondered how Carmen would take leaving the barn and heading back up to the ring but she seemed resigned to her fate by then and walked up with just a sigh.

We stood there and coached Tanya through the bridge and she was successful!

We walked back down to the barn and dismounted. (Carmen: thank god).

It was a great day. I loved playing ponies with Tanya. I was thrilled with how Carmen stepped up and was the 'grown up' horse. We definitely are going to be doing it again.

If you are on FB there is a hilarious parody about old ladies and ponies here.