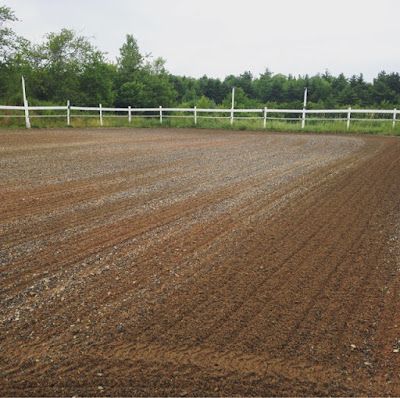 A couple posts ago Clover Ledge asked me about I did my ring. I thought I had written about it but I couldn't find a post so perhaps I didn't.
Banking on the idea that you won't remember either I decided to do a post about how we put in the ring.

When Ed and I bought our property all it had was a house and a shed. The rest of the land was a large field and woods.


However, it made the most sense in terms of land, home and cost. After looking at so many properties that had unsuitable home or barn or land (or any combinataion there of) we decided that it was better to build what we wanted.  That first year of owning the house we were living elsewhere and renovating. I walked the land in every weather situation to assess the best place to put a riding ring. In the end I chose the top of the hill (up by the trees in the photo above) because it had the best drainage and there was often a breeze to carry away the bugs.

After the house renovation,  we made plans for the building of the barn and putting in the first paddock then  it was time to get serious about installing the ring. It was difficult to figure out who to hire. It's not like there are a ton of people with 'riding installation' on their website. I did check with one company who had installed for someone else but the quote was rediculous. It literally said "1 riding ring $20,000" I asked him to break that down for me it was listing bringing in fill and drainage etc. and building a road. I tried to explain that the ground already had good drainage an there was no need for a 'road'  but I was a woman and what did I know? Long story short I didn't like him and I didn't have that kind of money laying around so I moved on.

Eventually we decided to do it ourselves. Which was probably really brave (and possibly stupid) but I wanted the ring and was, quite frankly, starting to sound like Smeagol. 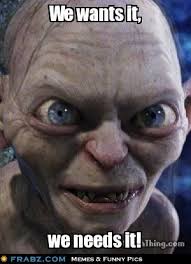 First we hired a contractor to clear and flatten the area we had identified. I was very clear with the owner that it had to be 70x200' or I wasn't paying him. He assured me it would be. Of course the man came and did it when I wasn't home. Ed told the machine operator that he thought it was short on one end and to fix it but of course he thought it was big enough and went home. When I returned I measured it and sure enough- one side was 70 wide but the other was only 58 and it wasn't quite 200 feet long. I called and the man had to come back. I know the owner was not happy with his worker but I had been clear and he agreed with me.

That was in September. Once it was all flattened we let it settle over the winter. The barn went up in October and Irish came home in December.


Settling was key for the ring- in the spring when the ground thawed we were able to fill in sinkholes. There really weren't that many and they were not deep. But it would have been expensive if the footing had been put in in the autumn.

After that we borrowed a spring harrow and dragged it around the clear area to get up all the rocks. We then raked the rocks into piles and transported them away with the tractor. Oh my god, so many rocks. I actually got tennis elbow from the raking and shoveling of rocks. But I did it without whining or complaining. I was building my dream and it felt good to do it myself. I used the rocks as fill for some swampy areas on the trails (that turned out to be genius). One day I was by myself filling in a weird 4x6' depression and I started giggling to myself over what the neighbours must have thought I was doing. Of course I might have just been over tired.

With the rocks gone, we flattened the area again using a rented roller thing (highly technical term). Then it was time for the footing. I bought quite a few truckloads of sand and managed to get my hands on some rubber. Not as much as I would like but some was better than none. I think it was 2 tons but it might have been 2.5. Using the tractor and a landscape rake we spread it out: 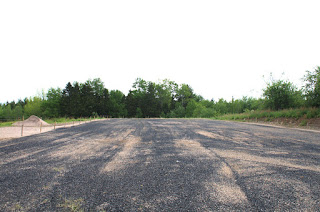 I love the mix of sand and rubber. It keeps the ring useable for a much longer time frame in the year. Even if it's frozen in the morning, once the sun hits it, it often thaws (unless it's been bitterly cold).

Once Steele was ready to be backed, Ed and a friend put in the fence. It does help it look finished.

I was right about the drainage- even after torrential rain the ring is fine within an hour. After a couple hours all the puddle are gone competely. The breeze is nice (despite what Carmen thinks about the blowing grass) because it does keep the bugs down.

For the first two years I had a real war with the grass trying to grow up through (the result of putting a ring a pasture). I did a combination of weed killer, dragging and pulling it out by the roots. Now it cotinues to try to creep in from the sides but I can keep it at bay with the drag. There is no more grass growing in the middle. Although I know that if I am not vigilant it won't take long to come back.
I love my little chain drag. It has longer tines on one side and is quite heavy. It does a great job dragging the ring for such an inexpensive purchase (about $300). 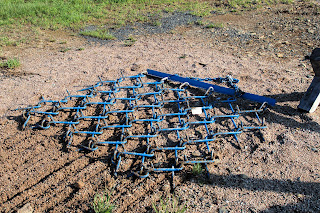 I usually drag after rain storm, to not only keep the weeds out but to stop it from drying too hard. The sun can bake the dirt a bit. I really enjoy dragging the ring- I call it my zen garden. Every year I buy a load of sand (this year I needed more to relplace some that had run off with the wet or just distingrated over time). I fill in any bald spots and keep it fresh.

And that's how Ed and I did a DIY riding ring. It was a lot of work and totally worth it. I don't think I would have the energy to do it again though (at least the rock raking part). My friends tell me I'm a bit obsessed (or OCD)  with it but that's okay- it's mine all mine.
Posted by TeresaA at 2:28 PM