This weekend I was at Five Fires Equestrian Centre for a two day dressage show.

I was excited to go- my goals were to:


Friday, just as we pulled into the lot the heavens opened and torrential rain along with thunder started. I was actually okay with this. I remembered last year when Carmen freaked out over being the arena during a rain storm. After I got her all set up I brought her into the ring to do some ground work. She was looky at a few areas but willing to relax by them -including the ramp.

I tacked her up and went in to ride. She was okay and normally I would ride her very delicately and try to keep her happy. This time I pushed a bit to ask for more. I am no longer walking on eggshells with her. That's when the ramp and 'C' became huge issues. I won't go into the blow by blow but it was a battle. I was not backing down- Carmen had to give me a try. I rode her in that corner until she gave me something and then I rode out. Like most troublesome behaviour, things got worse but I was determined. And surprisingly calm. Finally she cantered through the corner bent and soft and I immediately halted her and hopped off. She was a ball of sweat and so was I. It was warm, humid and we worked hard. At one point my glasses steamed up.

I hosed her off and thought 'well on the plus side the rain was a non-issue'.

Our ride times were after lunch and Shanea was coming out to coach me through the warm up (instead of a lesson). I was so happy we did that. I can get a little frazzled in the warm up and not know what I should be doing. It was so beneficial to have Shanea's voice in my ear helping me to sit up and ride. 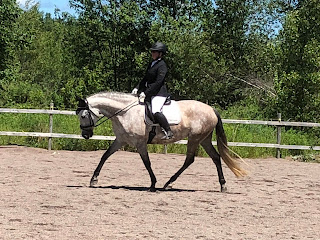 When it was time for our first test we were ready. I made sure to walk Carmen by the ramp and when she bowed I put on my leg and gave her a light tap with the whip. Instead of freaking she was all 'oh, right!'

I was so thrilled with our test- it's not that there were not bobbles, but we she was really trying for me. I may or may not have let out a whoop at the end. Shanea videoed the test from above which is really cool.

Our final score was 64.81 which was good enough for first place out of a class of 4. Judge's comments "Nice ride. Show more in the forward department...lengthens etc. Bending better L then R. Good job."
Which was fair. I was riding for the consistency not really going for it.

Our second test was just 30 minutes away so I opted to not dismount but instead spent some time walking her and then doing a short warm up. Shanea gave me some quick tips- and we were in again. It felt even better than the other one:

Our final score was 67.03 which was tied for first place. I lost on the collectives and came second. Still I was over the moon. The judge simply said 'good job Teresa'.

(I should note that the judge was Roz and Carmen and I had her teach us very early in our time together and she judged us last year so is quite familiar with our progress).

Shanea couldn't come the next day but I was okay with that- I both wanted her help and wanted to try it on my own.  It was much hotter and Carmen was much more mellow on Sunday. I enjoyed my time with her. While grooming her I stopped and laid my head on her back. She cocked an ear and sighed. The warm up was a bit tougher. Carmen felt like she was less in the mood to play and was a bit spooky around the ring. I stayed on task and kept working her, getting her supple and bendy (bendy is a highly technical dressage term). When she was feeling pretty good I decided to leave well enough alone and I walked her up to the ring. I sat there pretty relaxed and finally I felt her give a big sigh and relax. So I think it was a good call to stop drilling and start chilling.

When it was our turn I wasn't sure how it went. It felt like it took a lot more work but in some ways it felt smoother. I was working hard to make sure that there we no 'I'm tired' spooks. And there weren't any.  Sorry, no media but others told me it looked really good. Our score was 65.92. But the real prize was the judge's comment: " Some nice stuff here! Keep more focus on your horse's ribs and hindquarters- sit into the ride so you can better effect control of the lateral position and hind end engagement. This will allow her more sit in her step. So essential for a PRE. Love your partnership".

The last comment made me cry- that someone who hadn't seen us regularly can see our partnership filled my heart to overflowing. #menopausal_moment.

I thought I had an hour before my next ride so I gave her a rest to pee and drink (and I did the same). I tacked her back up and when I came to the ring found out I had the wrong time so only had 7 minutes before my ride. I shrugged and did a quick walk-trot-canter in both directions and headed to the ring. The truth was Carmen was warmed up and more was just going to tire her out and probably frazzle both of us. I went in determined to make our last ride a good one.

And you guys- she was there for me. All of her. There was no convincing or encouraging her, she was all 'sure, I can do that leg yield for you. Canter? YES!' There was one funny moment- we halted at X, and then turned down to leg yield right, the third time we turned down centre line Carmen was 'oh, right I know- we halt at X, right? And then I'm done!' I giggled at told her to go forward and she did. No pissiness at all. When we did halt at X I leaned forward and gave her a hug. I was exhausted. She started to walk out 'yup, we're done. Let's go. I need a carrot.'.

I cleaned her stall and got ready to go. In the final ceremony I had two more first places but hadn't seen my last test yet. I turned in my number and picked it up: 72.34!!!! I was thrilled. The comments said 'WOW! Huge improvement! Now you make me love you more!! Keep it up!!

It was our best show to date. And I couldn't be happier with my girl. I think we had a huge breakthrough at this show. Although, when I was putting my boots back on for the awards I saw her looking at me with a peeved expression 'you better not be thinking of getting on me again. That answer is no. Just no.'  I laughed and told her to relax.

I obviously need to have more faith in both of us.