Yesterday a Nor'Easter blew through our province. It hit hard and fast. I was at work and saw that it was starting. I figured I had time to finish some things up but in 30 minutes the world outside my window was white. I hurried out and had one of the worst drives home through a raging blizzard.

The wind was insane- we could hear it howling outside like a banshee. 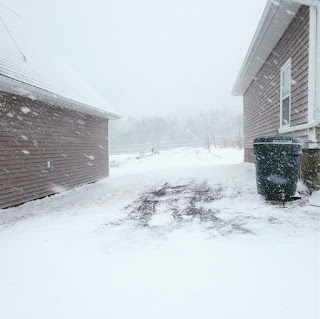 Opening the barn doors was a challenge. Sometime in the night we lost power and it's still not on as I type this. Thank heavens for generators. Also at some point in the night the snow turned to rain so there was not as much snow down as when I went to bed.

Ed and I headed out to survey the damage. In general we got off fairly easy. There was no major damage but still some work to do: 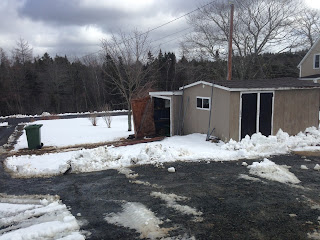 The doors literally blew off the shed. Which is a pretty neat feat when you think of it. 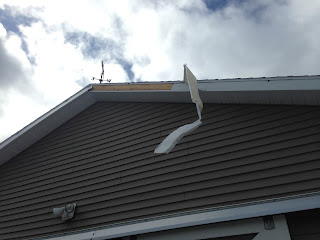 Some flashing from the barn was blowing around. I held the ladder while Ed climbed up and tore off the dangling piece. I had images of it blowing free and chasing my horses around the field. Yes, my imagination has some bizarre turns.

There was more damage in the woods. There were some trees down blocking my trails so that will be more work. 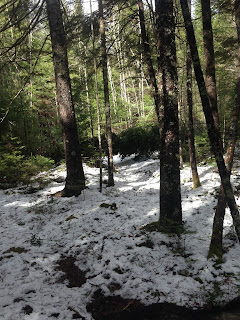 Not even sure how? 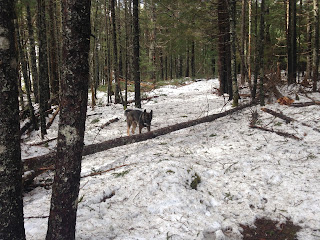 I would be tempted to leave this to pop over but I don't think that Irish could do it so it will be removed. 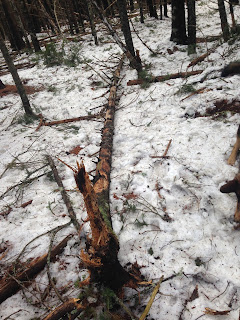 This one I managed to drag away myself. 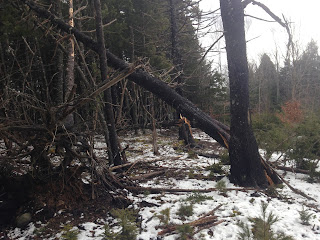 More carnage along the edge.

March is doing me in. But what can I do? I can't change the weather. And I'm trying to not let it get to me. Miraculously enough my ring seems okay. Once this wind stops I might actually get to ride.

And as though there were not enough trees down here's video of Ripley (my son's dog who's with us right now) trying to chew down a tree:

We figure that she's part hound and part lab but could she also be part beaver?