Over the last four weekends Carmen and I have been away three times. Each time we have gotten better. This weekend was a clinic with Johanna Beattie Batista.  We travelled on Friday and had lessons Saturday and Sunday.

I waffled about a lesson on Friday but I was concerned that it would be all about Carmen's reactivity so I decided to use Friday to school her in the ring.

I needn't have worried. She was actually mellow and relaxed getting ready and was very very good in the ring. There's a lot to look at both in and out of the ring. Inside there are stalls on one side holding equipment for ring maintenance and for therapeutic riding. Outside there's a vast expanse with trees, grass, horses, a river and golfers. It's not that she was 'fine' with all of it. She wasn't. But she went along with me saying that it was fine and we were able to actually work all over the ring with a few minor spooks.

After a pleasant evening of pizza and chatter I went to my friend's place to stay and we had a great chat. I fell asleep almost immediately. My lesson was at noon so my morning was beyond civilized for a horse event. Karen fed Carmen so I could relax over coffee and then head to the barn. Carmen was happy to see me.

The wind was wild all weekend. Like gale-force winds. I couldn't lunge her outside to warm up so I decided that we would have to do it in the lesson.

Johanna wanted to know my goals and I told her that it was to work on Carmen stretching to the bit. She watched me ride and then immediately stopped me to fix my seat. It turns out that I wasn't letting my pelvis move correctly with the movement: forward and neutral. Instead I was moving it neutral and back. This was preventing Carmen from using her back correctly. I practised it at the halt and then we walked off.

Carmen immediately became calm in the bit and then began to stretch to it.

Johanna also taught me to not hold my elbows at my side but just in front of the vertical. This makes it easier to follow the movement with my shoulders. And it really did make it easier. But it was hard to remember since I've spent so much time being instructed to keep my elbows at my side.  I like Johanna's teaching style. She stops you to explain something then tells you to go and experiment with it. As you do that she will call instructions to tweak it or comment if you are doing it right. It's very specific feedback and without a lot of extra verbiage. Just the way I like it.

I have to say that I had the best walk and trot work with Carmen. She felt truly forward and as light as a feather. In fact it was hard for us to control her power. It was like I had unlocked her and then it was too much for her to handle. When I asked her to canter it was immediate and forward and, wow. just wow. 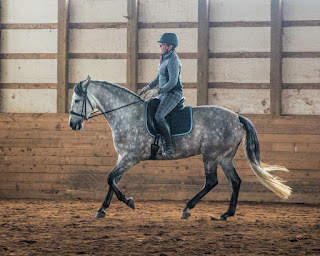 It was just the right lesson at just the right time. Through all of it Carmen was tuned in and attentive. I may or may not have laughed and smiled with delight when we nailed our transitions.

Day 2 was the same with some more work on things like bend. I realized that when I ask her to bend she speeds up. I  had been letting her go fast and then try to get the bend. That was wrong. I needed to slow her down and get the bend. When I did that it was much easier for both of us to travel correctly. It was interesting because the wind was even worse than the day before and it was colder. Carmen was more worried about the sound of the wind hitting the arena (I don't blame her) but as we worked she tuned in and we both forgot about it.

The exercise was simple- but doing it correctly required focus, timing and using my body properly. I left the clinic with just the homework I was looking for and knowing that I had to key to unlock her acceptance of contact. There's more photos and probably more to write about that will find it's way into the blog. But the photos speak for themselves. 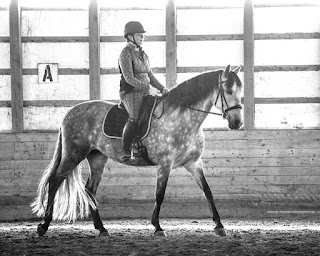 Someone asked me what happened to Carmen. I said that she was becoming the horse that was always underneath all the insecurity and reactivity.

Now we can start dancing. 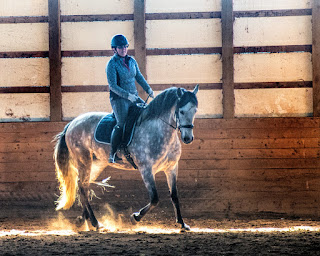