The secret of change is to focus all of your energy, not on fighting the old but on building the new.  ~Dan Millman, Way of the Peaceful Warrier


The past few weeks have been very interesting. It seems that I am now at a point where I can look back and see where we've been. A few months ago and Carmen only had one answer when she was frightened or felt pressured- to spin and run away as fast as possible. I had inadvertently been influenced to back off and not stress her at all in order to be safe- I often felt like I was riding on eggshells.

At this point, let me say that many of the things he has advised I have heard in different formats. But, because of where I am, there wasn't a chance to work steadily through things with Carmen. Essentially, I had a ton of puzzle pieces but no idea how they fit together. 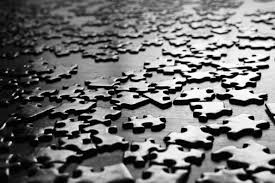 Royce is clear that his is not the only way. He tells me that there are other ways to get where we're going but he has his ways and he asks that I stick with it- otherwise the horse will confused and it won't work. I agreed and I don't really deviate.

So here are some of the changes that I have seen in Carmen:

1. Barn Manners -  her barn manners were pretty good. But now they are way better. She stands ground tied and rarely moves (except when your friend is visiting and you want to show off). She stands there calmly. There is no pawing, no fidgeting, no signs of stress. She gives me her hoof and does not try to take it away. I tack her up and can drop her halter on the floor and she puts her head into her bridle.

2. Ground Manners- she leads, stops, turns, on a dime. When I go out into the field she doesn't walk away. Some of this is my energy - I'm less stressed about the whole thing it's showing.  I can groom her in the middle of the paddock and she enjoys it. If I go to Irish first she will slowly walk up and politely stand behind me. Waiting.

3. Mood- overall she seems happier and more content. She doesn't appear to be as worried or on edge these days. She's more affectionate with me. The other day as I was getting her bridle she took her head and snuggled it into my chest. I gently stroked her head for a few minutes and then we carried on. If something does startle her she calms down quickly.

Which brings me to...

4. Spooking- Now that I have a better sense of what makes her spook it's easier to deal with. Before it seemed to come from no where and was unpredictable. Saturday I was riding her and asking her to forward off of the leg. She was resisting and after giving her a chance I took my crop and gave her a good smack behind my leg while at the same time I gave the signal I wanted her to respond to and I made sure that I wasn't holding with the reins. She went forward as I asked but in my head I was thinking  spooking in 5-4-3-2-1...and there it is. I knew she would get tense because I was putting pressure on her. In the past her spooking resulted in me reducing the pressure. It's not that I wouldn't reduce it but asking her to go forward off of the leg seemed fair and not unreasonable. So as her head was coming up I simply sat in the saddle and laid the inside rein against her neck to form a wall. Sure enough she didn't get too big a jump and we carried on working. The spooks are getting less frequent. I doubt that they will completely disappear but I hope that with time it will be minimal and easily sorted because..

5.  Carmen has a new set of responses- Instead of just running away- Carmen has learned other options. even more importantly she has learned to look for those other answers when she's truly worried. Again on Saturday I was riding her up by troll corner and she was definitely worried. But she was listening and willing to go forward. Suddenly a small bird burst out of the brush and flew right by us. Carmen gave the biggest non-spook I've ever felt. I felt her body lurch sideways and then pop back like she was on a spring. She jigged in place and then planted all four feet. I was thrilled. In the past we would have been half-way to BC before I could say 'eep'. I gave her a ton of praise and pats to let her know that she did the right thing. I could feel her relax and take a breath.

6. I have tools- Not only do I have a better understanding of Carmen, I also have real, effective tools to use. I am still a bit clumsy at time and I have to think what to do in a particular circumstance. But the lag is getting less and sometimes not even there. Last week when I was riding it was going very badly. I could feel myself getting frustrated and Carmen's new found skills were falling off like autumn leaves. I stopped, took a deep breath and thought- you know what to do here. Just break it down into smaller steps for both of us.  So I did and it worked. A ride that would have ended badly before was redeemed. And not because I stopped asking her to work, but because I asked her work in a smarter way.

The past two days our rides have been good. She's getting less and less reactive to the ring. Both days I was able to drop the gate and walk down to the barn. 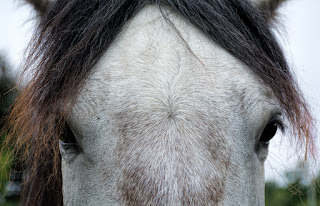