I was feeling pretty positive about my last ride on Miss Carmen and was looking forward to riding today. Cynthia was coming out but I wanted to start early in case we needed more ground time. She was very relaxed on the ground and good when I mounted. As we started walking Irish and Cynthia came up and I was glad to work with her on maintaining attention through LOOK IT'S IRISH! HE'S JOINING US! WE MUST STOP AND GREET HIM BECAUSE I LOVE HIM SO MUCH.

We settled into work and then I asked for a trot and we got our sideways haunches in/half-pass move. I'm getting good at ignoring that and just riding the forward. Cynthia handed off her crop to me and all issues of forward magically disappeared just by me holding it.

You have to love magic crops.

So now that forward was established we could no longer share the air with Irish and she would swing her haunches at him and pin her ears GET OUT OF MY SPACE YOU NASTY GELDING. I HATE YOU.

Again back to work with full attention if you don't mind. And she was attentive and forward and listening. We did a serpentine from A to C (A being the safe zone today) and it was fine. Then C to A and all was good until we hit A and something startled her in the woods (bird, brush, cat, troll? who knows) and we did a sharp 90 degree turn and a leap. Followed by another leap and a shake of her head as I tried to restrain her. By the third or fourth one I had her turned and we were trotting briskly along while poor Cynthia worked on settling Irish. 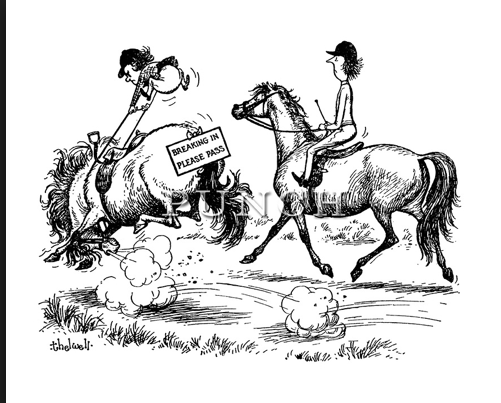 I took a deep breath and returned to work. Except now she's having none of it. None. She's DONE THANKYOUVERYMUCH. YOUCANGETOFFNOW

I, however, had a different idea- which is that we are far beyond the training being about settling in the ring and it's about working. Last year I would have tried to relax her at the walk and then asked for a trot and got off.

Nope.
No.
Nah-Uh.
Not gonna happen.

I left A for the moment and returned to our safety zone- the centre circle and asked her to walk-trot-walk and, you know, BEND. We settled  and then left the circle. At which point she wanted to check out again.
Nope.
So we we circled at C (which was the danger place last night and was not-to-be-trusted this morning when we started but now was okay COMPARED TO CERTAIN DEATH AT A.  I breathed and tried to ride with my pelvis but I rode. She picked up a canter and refused to come back. There! deal with that!
Okay then. Let us by all means canter but with bend. On a circle.

I sat the canter and rode it. My seat and hands were soft. After 4 -5 circles I started moving the circles down the ring. At first she would speed up and I would slow her. Then she started to think that canter was not so much fun but I kept it up.  I have no idea how many circles were were doing as we slowly spiralled down the ring. She tried to slam on the brakes at R but I gave a pony-club kick and we kept going. When she would try to take off I would do a strong half-halt and then release - at least the inside rein, I kept a hold of the outside rein but would relax my hands.

Finally we were cantering DOWN AT A. On a circle, with bend and not freaking out. I brought her to trot, and walk and then halt. Right at A. Then I dropped the reins.

She breathed and looked around. I could see her thinking about it and then deciding never mind.

We then walked and cooled out down at A. I kept my seat calm and my hands soft but we were walking around that circle. I then hopped off. She was hot and sweaty and tired. Good. So was I. I hosed her off and she enjoyed the cool water. I made sure to hose her legs well.

Every time I ride I always try to figure out what the best thing is to do in this moment. I  know that what I did sounded harsh but I need Carmen to figure out that working with me is the answer and, while she can make her feelings known, it's not her call. I understand that her prey instinct is strong but I need her to transfer that to me.

I have a lesson tomorrow and we shall see if I made the right call.