It was a great vacation.  It was just what I needed after my winter- the right mix of fun and relaxation in warm weather. I do really like Arizona- there's so much to do and see it's hard to fit it all in. I will probably put in some photos of my trip over the next few months. Another thing that I really enjoyed was spending time with Ed's family. Since they live out west we don't see them much. It was nice to reminded of just how lovable they all are (not loveable like a teddy bear or kitten but as wonderful, intelligent human beings).

All that said, I was ready to come home. I was missing my arm and my family (4 and 2 legged). We arrived late last night and spent the night at Andrew and Cynthia's before heading home. We were up after a few hours sleep and on the road. When we pulled into the driveway Irish was staring at the car. I got out and he walked up to the fence to greet me. Carmen was there as well but not quite as interested- she was trying to find the green grass that's starting to come in.

We went into the house and unpacked. I then bundled up (it seemed cold after Arizona) and went outside. As soon as I walked out Irish came up to the fence again. This time Carmen came running too.

Note the position of the right hind leg- it's going to become important.

I went out to the field and spend some time with them- rubbing them and catching up on all the news. I promised them both a good groom later on tonight and then headed up to the ring. The ground is beginning to firm up and I wanted to see how much work it needed. I decided to hitch up the drag and give it a good going over. It took about an hour- I went over it several times to loosen up the sand that had become compacted.

I noted that Irish didn't seem quite right. Joanne had warned me the the hadn't eaten all his breakfast- but that's not unusual for him so I don't panic over such things. In the house I kept an eye on him and he still didn't seem himself. I couldn't figure out what was wrong so I put on his halter and brought him in. At first I thought he seemed colicky but he did have some reasonable gut sounds (yes I own a stethoscope. If you owned Irish so would you). His breathing seemed normal and his gums pink. But he was a bit trembly in the hind end and he looked a bit peaked. He was very restless in the cross ties-which is not typical. My brain started to clamour with warning bells when he went to go step back in the cross ties and had to hop. Irish has an unspecified neurological condition (most probably arthritis) and I'm always on the lookout to see if it worsens. He can take some anti-inflammatories but only short term (because of his tendency to colic).

The voices in my head started up:
Could be a fractured pelvis
But he's walking okay
Or impaction
But I heard gut sounds
What about his gums?
They seemed normal.
'SEEMED' normal? What kind of owner does not know the exact shade of pink of her horse's gums?
You're right. I'm not fit to have horses.
This might be it.
While we're at it, what kind of owner goes away and leaves her animals anyway?
We don't even know what's going on yet.
COULD YOU JUST CALM DOWN AND CALL THE DAMN VET?!

Ah, the voice of reason.

I called and explained (somewhat incoherently) what was going on. The receptionist promised me a vet would call. In the meantime I noted that he was missing a shoe. I was sure I had seen it on him earlier. So I sent a text to my farrier: 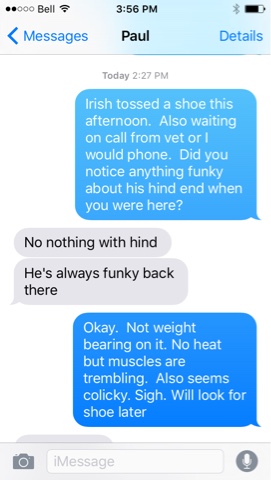 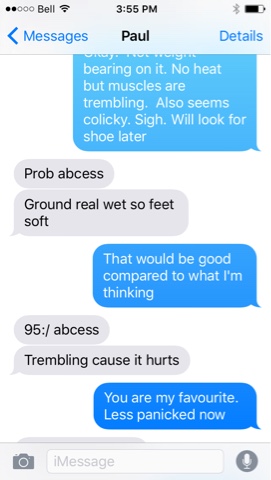 Once I read Paul's texts I realized that abscess made the most sense. There was no heat or swelling so it was either high up (in his hip/SI/ pelvis) or low in his foot. Irish has been prone to abscesses. I picked up his hing foot and cleaned it out. I tapped it with the hoof pick in a few spots and one area he would jerk it away from me. I heaved a big sigh. I started to boil water and get out the hoof packing stuff.

In the meantime the phone rang and it was Meaghan. I told her that I was much less panicked and what I thought was going on. We decided that I would treat it as an abscess and if it changed at all she would come out and take a look. I made up my poultice with boiling water, a hoof poultice and some towels. I put it in my Old Mac horse boot and put it on his foot. I had soaking feet and Irish is a real PITA about it. He will stand for the longest time and then tip the water out. I'm sure he does it for amusement. While his foot was soaking I mixed some feed, bute and stomach supplement to give him. He wasn't sure if he wanted to eat it (the supplement is new to him) so I held the tub and coaxed him to eat. Carmen looked on appalled at being left out of all this - especially the feeding.

Irish ate most of it and I put the rest to mix with his supper later. I let Carmen like the tub.

After I let Irish back out and walked around looking for the missing shoe. I couldn't find it but he followed me around like a puppy.

I know it sounds crazy but part of me thinks he timed this so that I would have to pamper him when I came home.