Working with Carmen is all about walking a fine line. Push her too hard and she resists strongly. Don't ask enough and she'll take over. She needs a leader but is not always interested in following. It appears that working with a sensitive mare requires a lot of negotiation.

I'm trying to push her just enough to get her to listen without sending her too far away. Sometimes I over do, sometimes I under-do and sometimes I get it just right.

Yesterday I got her ready for our work. She was a bit restless in the cross ties but very mannerly. We have brought in a load of hay and Ed has strung up a tarp to protect it from the sun. I like to keep the barn doors open for the breeze but it bleaches the hay. The tarp is right across from Carmen's stall and it's a perfect way to get her used to flapping/hanging things. We walked by it out of the barn without an issue.

In the ring we started our ground work. I try to alter where I start so she doesn't think that we always do the same thing. I don't worry about how much she exercises her body- I want to exercise her mind. What we do depends on how she is. I spend a lot of time at troll-corner so that she can learn that it really is safe.

When I went to get on she became a bit tense. So rather than get right on I spent some time working with her at the mounting block so that would stand. I finally got on. I realized that she was feeling tight and a bit tense. We spent some time walking patterns and I was trying to figure out whether we'd be better off moving into trot. I have the 4 cavelletti/trotting poles set up so that she has to go between the them and the rail. There is a lot of brush that blows and she was really uncertain of it. I didn't want us to bang into the cavellettis because she wasn't paying attention. I also don't want to argue with her head placement. So I placed my inside hand at her shoulder and kept my inside leg at the girth to create a bit of a wall. Her head was bent to the outside and I would ask her softly with my ring finger to come back but I didn't insist.

We then picked up a trot and it just seemed that she was a bit of a powder keg. I thought about getting off and doing more lunging but decided to stick it out. Rather than try to up my control by stronger legs and hands I softened both and simply rode her forward. I did my best to keep my hands consistent (not easy at all on a wiggly, gawky horse). When she was good I praised her and ignored the silliness.

As we trotted around a circle she scooted into a canter. I let it go and rode it forward. As we did she began to blow and stretch her neck. I rode a circle a few times and then we went up the long side, making 20 metre circles as we went. She fell out of the canter once (spook) and I just let her settle into trot and then asked for the canter again. She picked it up and we carried on. I then introduced trot-canter-trot-canter transitions.

Finally we trotted and then walked. I let her take the reins down to stretch. That always feels like a catch-22: I want her to stretch but want some rein in case she spooks. What I do is keep one hand on the buckle and with the other made a circle with my thumb and forefinger. When her head would come up I would draw the rein up through the circle so I could take it if needed. This worked well and she started to march and stretch out.

After a bit I picked up the reins and we cantered in the other direction. This is typically her 'bad' way (to the right) but she was fine. I didn't spend much time at canter. We came back to walk and I wanted to work on getting her to bend with my seat and leg and not be ignoring me to look around. I walked a bending line: I started shallow. If she didn't bend I just kept asking and didn't get into an argument. I felt her start to focus on me and my aids rather than the trees and the birds and the cars and the.....whatever. We did this a few times both ways and then I walked her close to 'troll corner' and then dismounted. I loosened her girth and marched right over to the corner to stand (this is how we end now). She looked around and then actually dropped her head to graze at the grass. First time she's relaxed enough with me to do that. 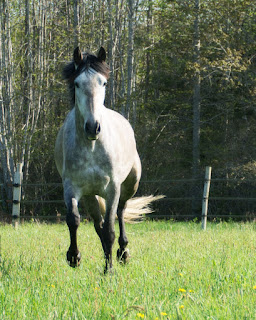