Yesterday was my day off. It was also a very rainy day. Which made it perfect for my plans: I decided to have a somewhat relaxing day and while pickling some beets I picked up at the market and to make jam from the raspberries we picked from our bushes. 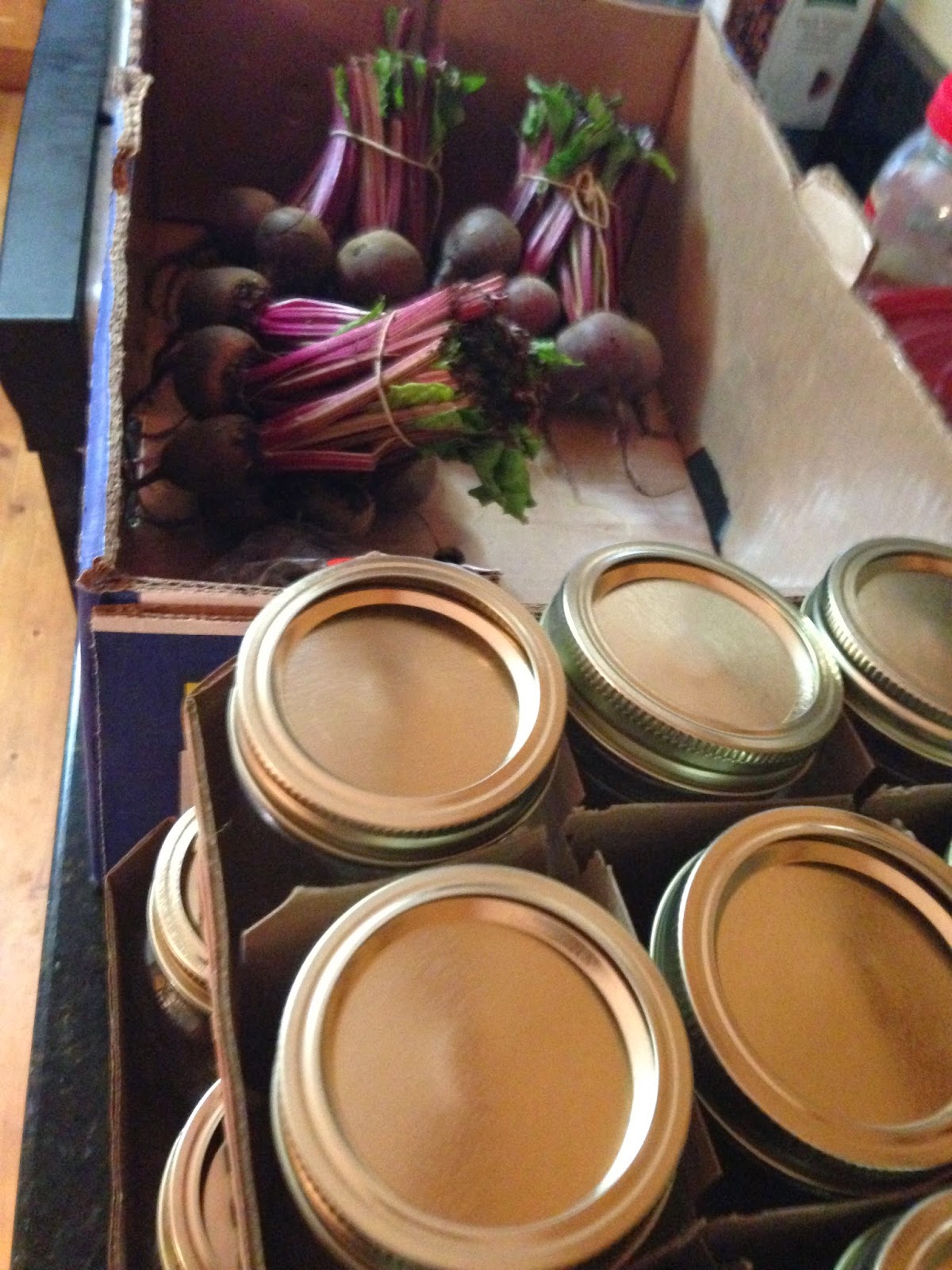 It seemed like a good plan. After turning the horses out I had my morning coffee and got to work. I had just finished boiling the beets and my kitchen was looking a science lab when I looked out my window and saw Irish galloping around. I realized that this was not a 'happy' gallop, it was frenzied. (I can't tell you what the difference is but it's real.) I headed out to the pasture to see what was up. Steele was grazing quietly while Irish was galloping between him and a point in the fence where our trail starts. I thought that maybe he'd seen a deer and it got him all excited. I watched him gallop back and forth without stopping. I went up to him and he was completely coated in sweat, his breathing was harsh and laboured and he was wild eyed. I realized that I didn't bring a halter so I took off my apron and put it up around his neck to lead him to the barn. He followed along, visibly upset but obedient (which is why all horses should be trained to lead with a rope over their neck). Once I got him back to the barn I put on his halter and took him out to hose him off. He was still tense but not quite as hot. I decided to turn him out into the small paddock out front so I could keep my eye on him. I let him go and he began that frantic running around again. And he started kicking and biting at his belly. He rolled a few times, got up and started it all again. Shit. Colic.

I brought him back in and gave him a shot of bananmine and turned him out to walk around while I went in and called the vet. She called right back and I outlined what was going on. She said to keep on eye on him. That within 30 minutes he should seem normal with the drug. At 3 I called her back. While he was no longer galloping around or rolling he was still not right. She said she was heading right over. I went out to get Irish. I also locked Steele in the barn. Irish was very agitated. When she came she was not happy with his heart rate- it was quite high and his gums were off-colour. She gave him a light sedative and gave him a rectal exam. There was some stool that was pretty normal and she couldn't feel anything. We talked about Irish and his 'issues'. I explained that he colics about once a year but each time it's more serious. There is no pattern to it (like a certain time of year). She left me with some strong stomach medication and instructions and left. As I watched Irish he began to graze and appeared more normal. At supper I gave him very little grain. At my evening check he hadn't really eaten any hay but didn't seem too bad. This morning his hay was gone. I gave him his second oral dose and turned him out. He seemed a bit cramps when he passed manure. Fingers crossed that it's all over. For now. I wish I knew what was up with him.

Throughout all this excitement Steele was a rock. He let Irish gallop up to him and push him around without protest. He was happy to be in the barn with Irish and happy to go back out again.

And I managed to get my preserves done. 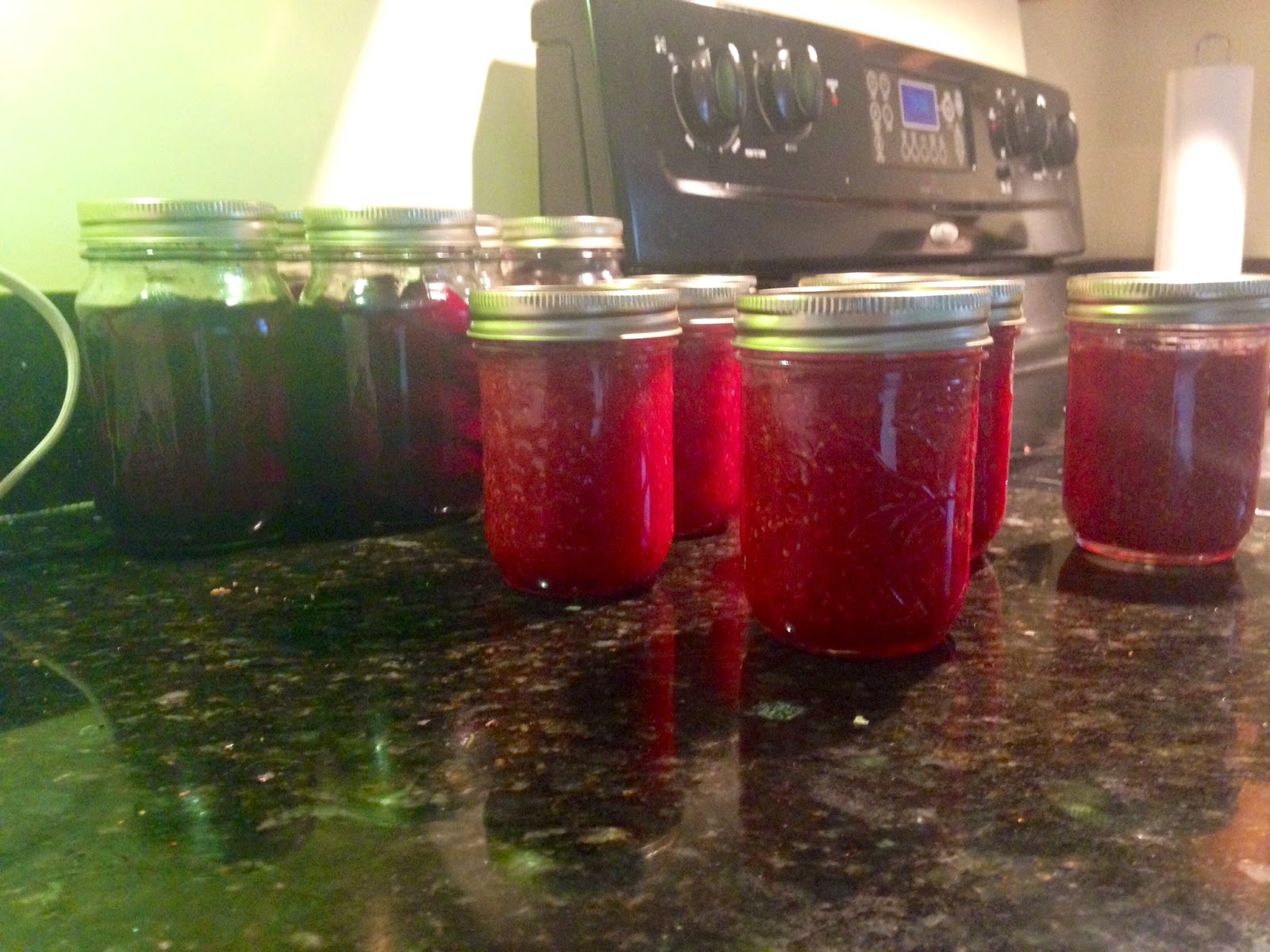