He will be two years old.

Two is a big deal. By now Steele's has likely reached 90% of his final height. He looks like a real horse. Many many people advocate starting a horse at 2.

While I can see why I deeply disagree with this idea. Horses are still growing and developing. I don't think it's a good idea to put strains on joints that are not finished. Many race horses do not race past 4 years of age. Many more break down. I've seen the same thing with Quarterhorse Futurity winners.  Others think that nothing should be done with a horse until they are 4. I am not in entire agreement with this either. I think that the second year is a great time to get horses used to saddles, bridles, ground work and all the myriad things they need to know. It's a ideal because they are keen to keep their brains busy but are still highly cooperative.

Convention is that all horses' age is calculated as of Jan 1. This means that Steele was two as of Jan 1, 2012. However, since he was  a late baby I was never comfortable with that. I will likely be like this for his lifespan.  It will just mean less as he gets older.

Enough of the musings. Let do some photos:
Here is Steele shortly after birth:


Now he's officially 15'2. Last week he was even front and back but now his butt has shot up again. I bought him a new halter for his birthday. I do love leather halters.

I can see the horse he will be when he's all grown up.

And I was able to get a conformation shot - a rare moment when he stood still. 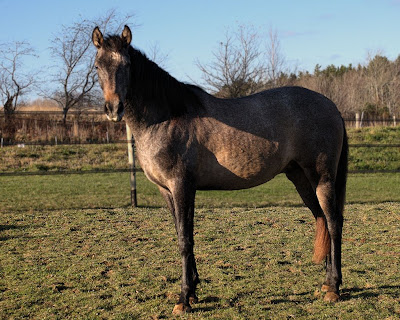 I bet that the next two years will be fun.