A Glimmer of Hope

As you may recall Irish has been having some difficulties that appeared to neurological. The vet had me put him on a month trial of Previcox. This belongs in the Non-Steroidal Anti-Inflammatory category (or NSAID). If his issues were related to inflammation either due to injury or arthritis it should help. He's halfway through the course of it. I have been riding him lightly so I can evaluate how it's working. Up until yesterday I noticed no change.

Yesterday some of our trot work felt more like ages past. It was not consistent but it was there. After my ride I tried the tail pull. Typically if you pull on a horses tail they plant their feet and resist. Irish would wobble over. I've not done it too much because I didn't want to train a response in him and, to be honest, it was too darn depressing. However, yesterday he planted his feet and wouldn't budge. I tried again. Nope- he resisted and quite effectively. I tried the other side. Same thing. By now he's looking at me as though to say 'um, WTH are you doing?'

I asked a good friend to come out and give me her opinion. She has decades of experience with horses and has had a few with neuro problems. She also knows Irish and I quite well. We did tests of the tail pull going up and downhill. We did tight turns. No issues. I rode him and he was lazy but normal.

So fingers crossed because the meds seem to be working. I called my vet and left a message. The original orders were to finish the prescription and then see how he reacts going off. 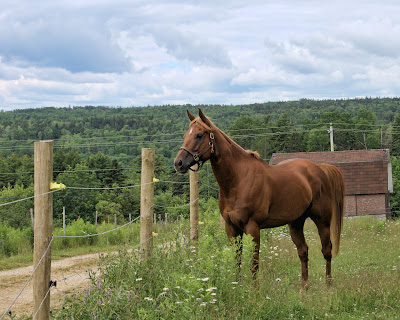 Oh and while we were playing with Irish, Steele did his level best to be noticed- prancing along the fence line with his tail up, pulling on Irish's cross tie and generally making a ruckus!
Posted by TeresaA at 6:05 PM