Dogs, cats and horses, oh my!

Martin was dumped on someone's property as a kitten along with his mother and 1 other kitten. I was visiting a friend and her neighbour came by to see if she knew of anyone looking for a cat. I had lost my other cat a few months back and since I know that cats find us (not the other way round) I figured this was my to be my cat. We chatted for a bit, my friend gave me a glowing reference and the wee kitten came home with me.
I sent a text on my way to Ed "Coming home with kitten. will explain later".
After much discussion we settled on the name of 'Martin'.
Martin quickly made friends with d'Arcy:
We quickly came to realize that Martin had decided that he had 'Cat Rights' and 'Dog Privileges'.

Martin is now a  full grown cat and firmly believes that he is 'all that and a bag of chips. '

On Monday I was riding Irish in the ring. It was a beautiful September day with a hint of Fall in the air giving everything a fresh feel. The dogs always hang out when I ride. d'Arcy supervises and Belle meanders about. This time Martin joined us.

The dogs know to stay out of the ring, although Belle needs reminders every now and then. However, Martin is, well a cat, so he does what cats do- which is whatever he wants.

It was an interesting ride as Martin tried to find the perfect spot- he tried climbing the apple tree, laying by "E", rolling in the tall grass and sitting on the fence post. Poor Irish keep trying to figure out where he was going to be pop up next. None of these locations cut it apparently so he decided that the most perfect spot was on the diagonal line from M to K. I didn't see this until I turned on the diagonal on a trot. I figured he would move so kept on the straight line. Martin laid there looking at us but didn't move. But when we got closer he moved- unforutnatley it was on the same line we were trotting. He must have figured we were chasing him- his fur stood up, his tail curled and he bolted out the ring where he turned around and gave us his 'cat glare'.

I didn't think anything of it and carried on with my schooling. A few minutes later I'm doing a 15 metre trot circle at R. When I reached the quarter line between I and S Martin came leaping out of the bushes as us with his RAWR face.  Seriously, it was like he was hovering above the brush- all four feet extended. It's probably what the mice see right before the end.

Poor Irish almost had a stroke. He swerved, broke to canter and acted like the hounds of hell were on our heels. I was laughing so hard I could barely steer.
I got everything back under control and carried on. Irish had quite the pep in his step after that!
This is what I think Irish saw: 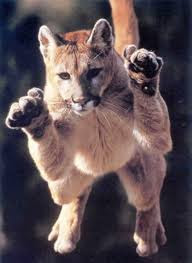 Martin was no where to be seen after that. He had his revenge. 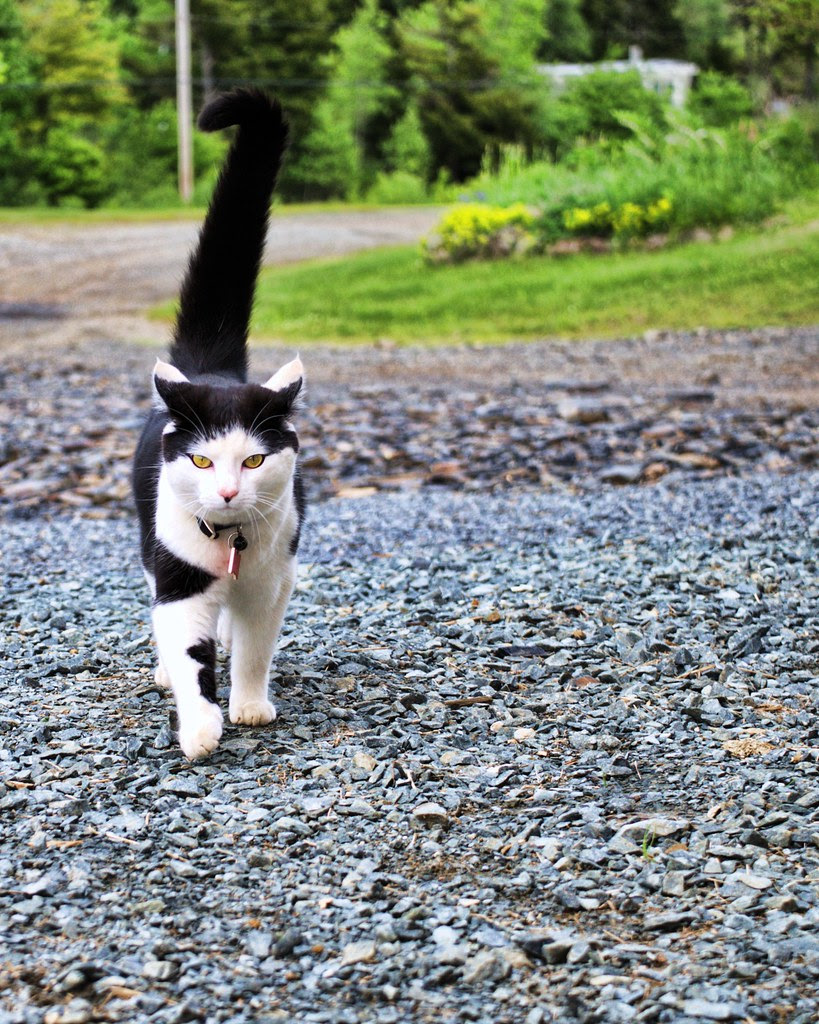