Replacing Old Expectations with New Ones

As Carmen and I continue to advance together it is becoming increasingly clear that I need to keep expecting more of her. She's simply not the horse I had 5 years ago (or even 1 for that matter).  To be honest, I do find myself often thinking 'oh that's a good try' which is fine if it is something new and/or hard. But really, I should be thinking that in terms of us trotting around the ring (it is okay if you are rolling your eyes at me, I am too)

My lessons with Jane are really good at keeping me (and Carmen) on our upward trajectory. Despite the heat for the past week I booked a lesson for Sunday. I was extremely fortunate to be first, which meant I rode at 8:30.

I was excited to show Jane our progress with the stretching. Jane also commented that my posture while riding has changed since last year. I think much of it is  because I am much more confident now.

There are many improvements in our rides. I was watching my video after and I could see how much freer her gaits are getting. Her walk used to be so short and now she's pretty close to tracking up right from the beginning. She's swinging through more.
You may recall that I was struggling to have Carmen be forward in her trot. It seemed that we'd get either fast or plodding. A couple weeks ago I was riding with Julia and no matter what I did to ask Carmen to move out more I could feel all her energy pushing back at me. I was sure I was asking properly and it really felt like she was saying 'no thank you'. Except without the 'thank you part'.
I asked Julia to pass me her crop. I asked for her to trot and she pushed back (I don't know how else to describe it, it's like all her energy is pushing back and she's turtling). I asked again and gave a tap. Her ears pinned. I asked again and tapped again. Her ears pinned and she snaked her neck. So gave her a sharp tap and she shot forward. good girl.  After that every time my leg came on she went nicely forward.
Since then I've been carrying a whip, for at least the beginning. In trying to just use my legs I inadvertently accepted Carmen choosing to do what she wanted (which is usually less). Now we have a nice forward trot right from the beginning and it's so much easier. 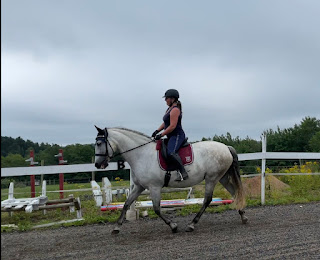 This is some of early trot work in the lesson. Which was what our good end-of-lesson trot used to look like:

Jane has been expecting more of us as well. I guess that's fair. So I can expect her to be much more clear on what my hands should be doing, where my leg should be and that she asked us to do shoulder in out of the corner not at B. Not that she's ever mean or yells. She's just super clear with her expectation. She's also quick to point out when things are good. I've been working on my shoulder alignment the past week and she noticed right away.
With this forward motion transitions are so much better and our halts are getting there.
Our right lead canter is soooo much better. It doesn't look so up and down anymore (although there are moments). I quite like this snip of our canter to trot transition. We didn't splat on our forehand and speed up.
I have to remember to use my core and not let my legs swing all over the place. At least I'm getting better at keeping my thighs looser so my calf can come on. 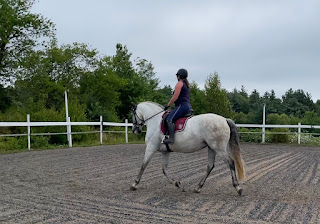 We were done a lot of the work and were finishing up doing some walk work: shoulder in, renvers, travers (which I constantly mix up btw) and turn on the haunches. It was going pretty well when a neighbour began to rev an engine. That caused Quaid and Irish to spook in the paddock and Carmen totally locked on that.  Now, Quaid I understand. I don't think he's heard that but my horses have heard that particular racket many many times. Carmen also rarely reacts to Irish pitching a fit in the paddock. But she was tired, it was hot and so..... Anyway, the remainder of the ride was about me containing Carmen.
Actually, that's not true, contentment would have been my goal. Jane wanted me to continue to work with her and get good work from her.  It was great opportunity for Carmen and I. I viewed it as getting to work through our pigeon problem.
Here's the beginning. Carmen was pretty clear that she wanted to bolt (I was appalled). I was pretty clear that she was not going to (Carmen was appalled). Jane was pretty clear that we were still working (we both were appalled).
Heres'a video of right after everyone was spooked by the engine.
I was quite pleased at how I fought my urge to bring my hands up with her and tighten my thighs so I pop out of the saddle. To be honest, I wasn't nervous or scared or even frustrated. I was just calm. And we worked through it and got some of our best turn on the haunches.
So apparently, we are capable of having emotions and doing good work. Who knew? Jane, that's who.