WTF was that? Modern Pentathlon 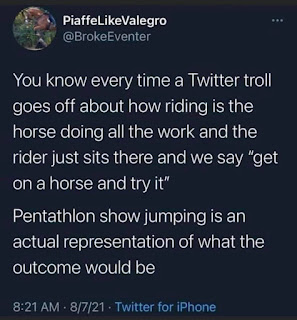 Historically I've been a fan of the Olympics. I have found myself emotionally invested in the outcome of sports that I never paid attention to in my daily life. After the glow of the medal ceremonies fade I return to my normal life and never think of it again.

This year I haven't been so into it- mostly because of the misogyny and racism but I did watch the Olympic dressage and plan to watch eventing and show jumping when I have a chance. Then my FB feed blew up over the women's Pentathlon equestrian phase. It appears that a german competitor lost her shit during the show jumping and ended up losing her gold medal because the horse 'would not cooperate'. There were cries to remove the sport from the olympics and petitions to stop the show jumping phase.

Now, I try to not jump on the bandwagon without delving more. Turns out that the Modern Pentathlon is comprised of five events: fencing, swimming, running, shooting and show jumping.  My initial thoughts on reading the news stories about the 'naughty horse' was that 'a bad workman blames his tools'.  But it's easy to look at a few examples posted and believe I know all about it.

So I watched the entire equestrian phase (Canadians can find it here, about 3 hours in.  I don't know if the link works for other countries).

And I was appalled. I did see competitors who knew how to ride but most of them not at that level. I did see horses who understood the job but still needed a rider to put them in the right spot for the jump and very very few did. These horses gamely tried or stopped because it was not safe. Most riders wore spurs and had no business doing so.

I saw riders come off and get back on. Like, how is that even allowed in this competition since it's not allowed in any other equestrian sport- if you fall off you're done. I saw riders with a death grip on the reins and kicking the horses forward. Most of the horses were confused.

And then I saw Annika Schleu's ride. Normally I don't believe on piling on and I'm sure that this woman is getting her fair share of hate online. But honestly, she crossed so many lines I don't know how to feel sorry for her. I have spent a long time working on improving my horse knowledge. I did not see a horse that was feeling 'uncooperative'.

I saw a horse that was terrified and in full self-protection mode. And in that state,  he was hit again and again and again. Finally he went forward only to be ridden really poorly to jumps and he had to either destroy them or refuse. I am sure that his belief that he needed to get out of there was reinforced by all the emotion coming from Annika. Which got him beaten again. finally his nightmare was over. Yet we're supposed to feel sorry for Annika?

I don't fucking think so. We've all been there with horses- maybe it's a competition, maybe a clinic, maybe a trail ride and our horse has a melt down. We stop, pat the horse and go back to the stall to stew, maybe cry and then build a plan. Blaming the horse in this situation is like blaming the loss of a hurdle race on the trip hazards on the track.

Can you imagine if the final event was a canine agility course and she beat the dog like she did that horse? She'd have had to go into hiding.

Saint Boy did not stop Annika from getting her gold medal. She didn't deserve it. 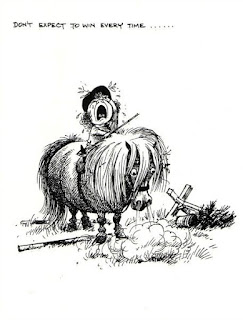 Let's summarize the failures of this event:

1. animal cruelty. Honestly, is that not enough?

2. if your sport includes riding horses you should fucking learn to ride. If I don't know how to swim I'm not going to enter a swimming competition.

3. lack of accountability. There was so much:

The UPIM issued a statement that it ""regrets the trauma suffered by Saint Boy in this high-profile incident and has penalised the coach who violated the UIPM Competition Rules by striking the horse from outside the ring." Her penalty was to be thrown out of the games but nothing more. The is inadequate. I doubt that Saint Boy even registered the punch but it speaks volumes to her view of animal welfare. What about Annika? She needs to be penalized as well.

A horse is not a motor cycle. It is a living being with feelings and needs to be respected. Who is speaking for the welfare of the horse? A dressage horse was eliminated because he had a bit                  of blood on his mouth. A rider in the other sports can be eliminated for excessive use of the whip.  Why did this not happen?

I looked at the Canadian FB and website the pentathlon. It was silent. On the FB page there was a photo of riders kissing their horses. How sweet. I'd prefer that they take a look at the FEI rules for the welfare of the horse and actually apply them.

4. A failure to secure the safety of the horse and rider. A horse in the state that Saint Boy was in is a danger to himself, his rider and those around him. Letting this ride continue as it did put Annika in danger. That he did not flip over on top of her was a minor miracle.

Saint Boy was screaming for help and the Olympics failed him. But they also failed all the other horses in this competition. If we, as horse people, don't stand up for the welfare of the horse who will? I'm terrified that this will be add to the argument that riding is cruel or that competitions are cruel.

The Olympics started with misogyny and racism and ended with animal abuse. Not exactly the gold/silver/bronze that anyone wants to win. What a legacy.