Getting Unstuck But Not Unglued

I gave Carmen Saturday off. This allowed her teeth to settle after being done on Friday. Ed and I also had plans and headed out for a day trip with friends to a bunch of wineries. It was a beautiful day, full of laughter, food and wine. 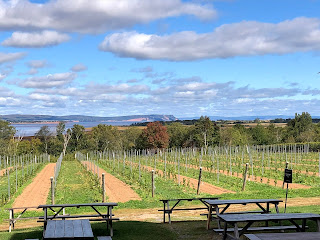 Sunday I had a lesson booked with Shanea. It was a lovely day but by the time my lesson came it had become cloudy and a bit brisk. Carmen was clearly tense. I spent time doing groundwork and she had improved but was still a bit tight.

Normally I would have that pit in my stomach thinking I was in for a difficult ride. And I did have a wee small pit, but mostly I was sure we could be okay. And we were. I am getting better at not choking her down when she's like this but asking her to go forward. It's a balance to not have her rush but I much prefer the going forward towards things that worry her than her running backwards.

We worked on her being straight on the outside rein. We did an exercise of leg yields towards and away from the rail.

Funnily enough when she was on the outside rein and bending she would float sideways. I can feel how this helps her to become supple and to step under herself instead of inverting and flinging her legs out behind.
We do a lot of shoulder fore to keep her on the aids while still going forward. Seriously, all I need to do is move my seat a little and she does it. While her old habit of putting her haunches in on the right rein is still there is a lot better. 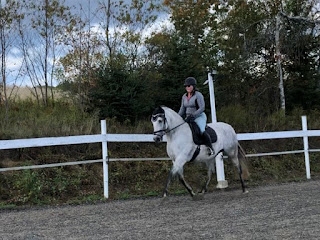 We worked most of the lesson on adjusting her trot stride- shortening it and pushing it out. This definitely pulled on all my physical ability to ride well. But we're getting there.

I can feel her starting to understand this.

Carmen had regular breaks throughout the lesson. These help her to level out and rebalance herself. We finished working on walk-canter-walk transitions keeping her hind leg underneath instead of pushing out behind. I'm not great at feeling that- her shoulders are so strong I feel the front legs so I've been trying to pay special attention to this. Shanea said she's seeing improvement so I'll take that.

It's beginning to feel that we are coming 'unstuck' from our pattern of making rides all about the spooking. Carmen is getting less stuck about going into to the spooky corners.