Once again I am a terrible blogger so let me try to catch up.  In my defense work has been quite exhausting and I find myself searching for energy at the end of the day to write.

Last weekend I went off to another Obstacle Clinic with Mike and Nikki Porter. I had put myself on the waiting list and found out there was a spot. Then another spot opened up and I talked my friend Paula into coming with me. 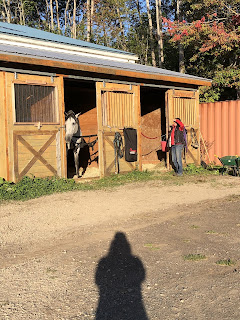 Carmen: why am I here?

This time I was going with goals that had very little to do with the obstacles. I wanted to get some further insights on how to improve my connection with Carmen after the things I learned at the last clinic.   My goals were to push her a bit and not walk on eggshells around her.

Saturday morning after meeting the others and discussing our goals we started with the ground work.  It was interesting- Carmen pretty much did all the things. But her ears were not happy and I was not feeling any connection.

I've been here before. Often. It's hard to know what to do - she's being super obedient but also distant. Like the student at the back of the class who knows all the answers and so doesn't really engage in the learning.

Now you might be wondering what the problem is with this. After all she's doing what I ask.

Part of it is spiritual- I want to have a sense of partnership with my horse not feeling like I'm just a passenger. The other part is safety. I find that if Carmen is not engaged with me in what we're doing she's very likely to find something else to focus on and make decision's that are not good ones. 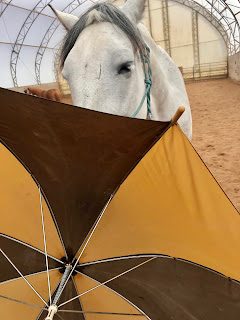 Carmen: why must you irritate me with these things
However, I kept working away feeling like I was an irritant to Carmen but not sure how to approach it. Then Mike and Nikki set up the 'box' exercise- where you have to get your horse to stand in a box drawn in the dirt without moving your feet.  Mike came along and put ours out quite far. Nikki gave me a longer whip to use. It was tricky- especially the backing up part. I had to make my ask quite strong with the rope to get her to back up. Her initial response was to stiffen and raise her head while glaring at me.

But then we got it.

And got it again.

And when I looked at Carmen she was gazing at me with her full attention- ears up, eyes soft, body relaxed but ready and saying 'what are we doing now?'. 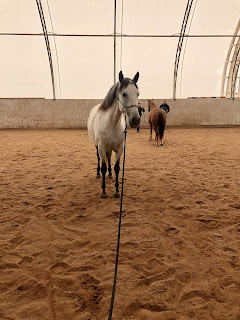 And that was interesting.

I spent the night thinking on that and trying to figure out how to translate this to under saddle.

The next day, in the morning the plan was to do the obstacles under saddle. there was a part of the ring set up to be open for riding. The plan for my group was to intersperse riding with obstacles. I was probably one of the first to get on (after reviewing in hand first) because I really wanted to spend time doing that.

Carmen at first was not super keen on this (side note- she's changed her shape and lost weight so saddle fit might be playing a role here. I have an inquiry out to set that up). But Nikki really helped me with that- keeping her going. The phrase she used was to 'support her but not drive her' which made a lot of sense. I think I get so worried that she's going to bolt that I override. sigh.

But it really really helped. WE would work, do an obstacle, work, rest on an obstacle. Interestingly enough, Carmen was really good about the obstacle work- there was no convincing her about it, she was all business. We not only pushed the flintstone car- we actually dragged it behind us to go back. And she gave zero craps about that. For reference- this is an old video of Carmen pushing the car (last year). It's her favourite thing of all the things.

When I was told we were done I was shocked to see that I had been working Carmen for 2 hours! It seemed way less than that (at least until I dismounted).

That afternoon Carmen dozed in her stall while I worked around her. She's never done that- her stall manners are really good but she's never slept in my presence. I felt doing more would be gilding the lily so I did not ride in the afternoon. Instead I took her home and let her enjoy her paddock for a few hours. 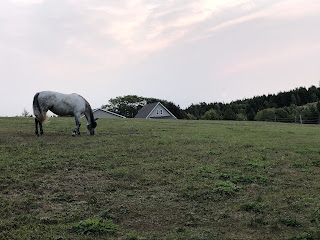 This is her happy place

This clinic helped me to understand that I can ask for more than just compliance. I can ask for the connection and I really need to do that before I ask for more complicated things. I need to figure out how to do this with the changing moods of day to day for both of us. I know I have a strong desire to seek it but I'm not sure how to help her have that same desire.

I suspect I will be flailing a lot. And failing but I hope to build on this success and figure out how to move forward with it. 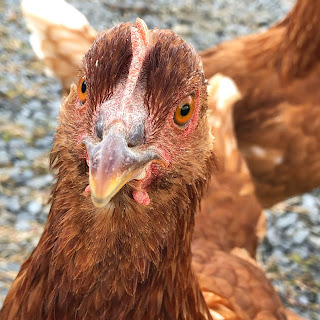