Working on the Teeter-Totter

You guys, it finally happened! I had an in person lesson with Shanea! She and I had discussed it at the end of our last lesson. She had some requests from others. I knew that we could do the lesson and stay well away from each other. And that is exactly what happened. I was up in the ring warming up and she came from her car to my ring.

The weather was sunny and warm but also windy. I hadn't been able to ride for a couple days so I was semi-expecting her to be a bit up. Instead,  she was practically asleep. I did our ground work and even go her to canter to try to get her going a bit.

I mounted and getting her to do our relaxation patterns was pretty easy. So when Shanea arrived I was excited to tell her that we needed to work on getting the energy up instead of down. I told her that I was more confident in getting the up energy down than getting the low energy up. It is because I love the relaxation, but I need more energy without her thinking that I'm punishing her for relaxing.  While we chatted Carmen took a nap.


We also worked a lot on straightness. Turns out I have no idea what being straight on the right rein actually feels like.  Carmen tends to look to the outside and I try to correct that with the inside rein. All that does is make her more crooked. To correct it, I wasn't allowed to touch the inside rein until I got her straight on the outside with inside leg to outside rein (have you heard of this whole inside leg to outside rein thing?). What was cool was that as we worked I started to really  feel it and Carmen became so adjustable.


Like most things we would get it, lose it, get it back. But as the ride came on she became more and more supple. Riding haunches in/shoulder in was just a little movement of the seat and a little outside rein.

The other part of lesson was getting Carmen to step under herself and push from behind. It required me to be very aware of my seat and what it was doing and not holding too much. We played with lengthening and shortening the walk. At first she thought I wanted halt but as we worked it became easier and easier. Especially once she became truly straight.

We then started asking it at the trot. At first it was trot, walk a few steps then trot. Then it was trot, ask for almost walk and then trot out. Then everything became so soft. I worked super hard on keeping my hands quiet and soft. Shanea asked me ot feel the bit with my elbows and back, not my hands. That helped but it's tricky and I always want to do far too much with my hands. Sigh. Poor Carmen. She is becoming very tolerant of me (Carmen:  I know. *Sigh*. I deserve more cookies). 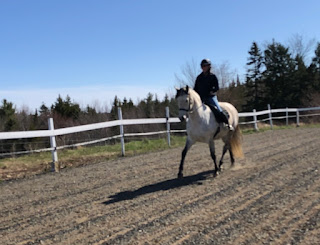 Carmen began to tire and wanted to hang on the bit more. We worked her a little longer, playing with the canter and then called it quits. I don't want to make her too sore.  I loved this lesson so much. I love working on the teeter totter of forward and back as well as her energy.


While I really appreciated the virtual lessons, having her there was so much better. I am so enjoying Carmen this year. I also have a sneaking suspicion that she's enjoying me. It feels good to not be in a battle. Sure, sometimes I negotiate and sometimes I have to draw a line but I'm getting much better at letting it go after.  Whatever happens this summer with shows I think that Carmen and I will make a ton of progress and it will be good for us.