I gave Carmen Monday off this week. Not that she needed it but I had other things I had to do (like work) so let her be. Also, when I came home I found our cat, Chester dead in the barn. It was a shock and first I thought he was sleeping. He was young and I don't know what happened. It is possible that he ate a rodent that had been poisoned (not that we use but there might some in the neighbourhood). Or he perhaps had a health issue that we didn't know about. Either way I felt horrible to find him laying there.

Tuesday I squeezed in a short ride and she was awesome- soft, listening and easy. I wanted to continue to work on using my seat for transitions. She really tuned in and when I asked her to do a trot-halt using just my seat she responded beautifully and I hopped off.

I rode again on Thursday and it was less sunshine and roses and more clouds and thorns. The wind was up and so was Carmen. I focussed on staying soft but not letting her get away from my aids. She felt tight and stiff and was quite spooky. But we got some good work and then I stopped. While she was being a bit of a tool about things (like spooking at the trot poles piled outside the ring that have been there forever) it didn't feel out of control. I chalked it up to a bad day due to the wind and cold.

When I was grooming her I felt how tight her poll was. I don't know if she was reactive because of her poll or her poll was tight because she was so reactive. I spent some time massaging and it and she relaxed. It was much tighter on the right.

Today I had a lesson booked with Shanea. Again it was a cold and blustery day with a storm forecast for later. I went up early to do some ground work and lunging. When she was settled I got on and we began to walk around. Shanea came up and I brought her up to speed on the clinic. Carmen was a hot mess. She was tight and coiled. When I asked her to walk down towards the far side of the ring she flat out refused. She began to back up and then spun and bolted.

I sighed. So that's how it's going to go.  I rode her into a circle with Shanea being super calm and deadpan, despite being in imminent danger of being trampled.  We worked Carmen through her feelings until I could find her brain. 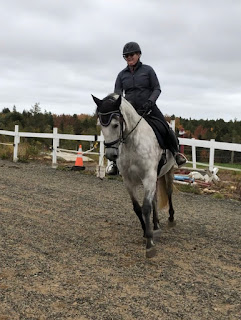 After that bolt it was just a lot of her getting tight, me focusing on my seat and not on writing sales ads. She would relax and we would start again.  I wanted to work on transitions so we spent the latter part of the lesson doing those.  I was actually quite happy with the trot-halt-trot transitions.


After a few she felt a bit anticipatory and like she was getting frazzled so I asked her to pick up a canter to change the topic. It was a nice canter and felt good. We switched directions and we got a few good transitions to the right. It felt that we had gotten as much as we could without starting to go downhill again so we called it.

When I was grooming her the vet called to confirm that she was on her way. I had arranged for her to come and check Carmen's teeth and give the West Nile/Triple E vaccine. In her exam she noted that Carmen had some back soreness. I wonder if it was because she was so tight or was she tight because her back was sore? Also, I was correct- she did need her teeth done. Especially on the right side. The same side her poll was so tight.

I will be curious to know if things improve now that her teeth are fixed. I know that I will monitor her back and poll for a bit to see how they feel before and after our ride.

I also had the vet look at Irish and give him the booster. She spent a long time listening to his heart. She noted that he has an arrhythmia that he hasn't had before. She let me listen: instead of a ba-dub, ba-dub it was a ba-da-bub, ba-da-bub. She also told me that every so often the beat would skip. She told me to not worry but just monitor it.  So I will. Having an older horse with health issues is not for the weak.