Dancing with the Stars

So this weekend Carmen and I did our dance number with our partners Karen and Kalimo. Right before I had these fears that I was going to be in a viral video featuring me in a fluffy dress going ass over teakettle in the show. Spoiler alert: that didn't happen.....

Carmen: Oh for heaven's sake, could you make it more boring? Move over, I'll write this one.
Me: wait, what?
Carmen: *waggles hoof* go along now, those stalls are not going to clean themselves.
Me: um, but I----*Mare glare* sigh* okay

Sorry about that gentle readers. But honestly, since I was the 'star' of the show, it seems appropriate that I type it.


To be honest, I thought my show season was done. But nooo, my servant signed us for another show but she promised that this one would be fun and, more importantly, just one day. Karen and Kalimo arrived at our place on friday for this thing called a 'dress rehearsal'. They rode and then put us in the barn. I knew something was up when they left our saddles on. I heard a lot of rustling and giggling in the tack room but it didn't sound like a carrot bag. Then they came out looking like a ruffle factory exploded.

Kalimo looked worried but I just rolled my eyes. Seriously, some days I'm sure she thinks she's 12. When we walked out of the barn Irish's head shot up and he dropped the hay he was eating to stare at us open mouthed.
Irish: Oh my god. WHAT IS GOING ON?
Carmen: Oh, you know, she's lost her mind again.

Apparently the dress rehearsal was a huge success. Of course it was.

We arrived at the show grounds on Saturday. I remembered this place- it has so many places for trolls to lurk. Karen and Teresa rode in the ring and ran through the dance a couple times. I was not in the mood to play because
A. I had to show her all the danger spots, and she paid to no attention.
B. KALIMO KEPT BREATHING THE SAME AIR AS ME.
I know everyone things he's so handsome and sweet but  I am not interested. At least not right now.

Our big number was near the end of the day, which is fitting. There were a few riders (young and old) in costumes. I have to say that this was the loudest show I'd ever attended. There was so much cheering, laughing, whistling and hooting in my life.

In our warm up I was, frankly, an angel. Don't tell my servant but I enjoyed the rustling of the fabric and the roses in my mane. So much prettier than the black and white of dressage. I like dressage but don't you think it's time to glam it up a bit?

We went in and after a few technical difficulties the music started. I knew that I was on display and drank up the attention. I even forgot to be afraid at the spooky corners. But not to get after Kalimo for continuing to steal my air.

I am sorry to say that my servant did not share my thoughts about how this was serious business.  Would you believe that she giggled through the whole thing????? It was so embarrassing. Although I will admit that she rides better when she's happy. But still, giggling is so unsophisticated.

At the end I didn't want to stop. Couldn't Kalimo tell that the exit was right there? But no, he had to stop and look noble. I did enjoy the cheering though. Clearly they recognized greatness when they saw it.

My servant was so happy. I guess it's not a bad idea to let her fun every once in a while.

I know that you are dying to see the video so here it is:

****
Teresa: also, the show was a huge fundraiser. Everyone's efforts raised $12,223 for Breast Cancer. Not bad for one little show! 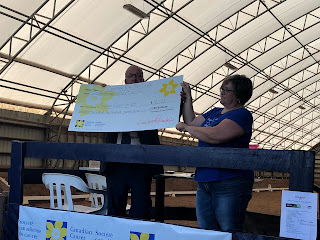